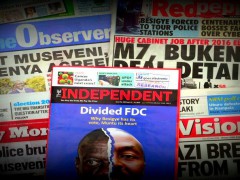 In Uganda the freedom of the press is increasingly getting narrowed. The first week of May was a bad one for Uganda’s journalists as the government through the minister of information announced a ban on media coverage of opposition political activities. The Minister warned that any media house that would violate the ban would have its license revoked. Indeed, media houses especially television stations have not featured any events or views from the leading opposition party.

Just hours before the 12th May inauguration of Yoweri Museveni as the elected president of Uganda, for a 6th term in office, social media sites have been blocked. This follows an outcry from the political opposition parties that claimed the February 18 presidential election was rigged and therefore had called on Ugandans to protest the inauguration of Mr Museveni. Uganda government claimed social media sites were blocked for security reasons.

Many media houses in Uganda are now practicing self-censorship

Since the February 18 presidential election the media has come under attack from security agencies and some government officials with journalists harassed and others assaulted in the line of their duty.

According to Dr. Peter Mwesige of the African Centre for Media Excellence, the Ugandan Cabinet’s ban on “ALL live broadcast media coverage of the activities of the ‘Defiance Campaign’ organized by Dr. Kizza Besigye and his cohorts” is as absurd as the Constitutional Court’s interim order that halted the opposition’s election protests.

During World Press Freedom day celebrations Dr. Katebalirwe Irumba, the Ag. Chairperson of the Uganda Human Rights Commission, urged the government to “keep all restrictions on freedom of expression and the media within the acceptable human rights standards”.
“In this respect,” he said, “they must be legal, necessary, proportional, acceptable and demonstrably justifiable in a free and democratic society; and those that enforce the restrictions must be accountable.”

Dr Mwesige says the ban on live media coverage of Besigye’s defiance campaign is illegal, unnecessary, disproportional, unacceptable and unjustifiable even in a society like ours that is neither entirely free nor fully democratic.

Uganda’s media freedom ranking at global scene has dropped. The intimidation of journalists seems to be on the rise. “For instance, between October 2015 and February 2016, 17 journalists were assaulted while covering elections,” says a report by Human Rights Network for Journalists, an activist organisation that tracks incidents of abuse against media practitioners in Uganda.
Such abuses saw Uganda drop from position 97 in 2015 to 102 in the Reporters Without Borders’ World Press Freedom Index 2016.