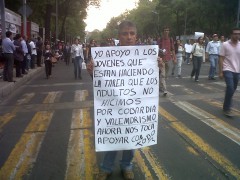 It seems that it just takes a couple of brave students plus one collective vision in order to awaken a society’s hunger for democracy. In the final months leading up to the Mexican presidential elections, 131 students from a private university– Universidad Iberoamericana– decided to defy the media’s allegedly favorite candidate, Enrique Peña Nieto.

Immediately Nieto’s party accused these students of being secretly organized by one of the opposition parties, and of course this only triggered more indignation, giving birth to a new apolitical movement that supports a platform for the universal value of free information and mediatic democracy.

Here Diego Flores captured a man supporting the movement and claiming that he´s now supporting the young people who have finally made the homework that the adults couldn´t do because they were too indifferent cashing their checks.

Probably inspired by student movements that recently took place in England, Chile and Spain, the Mexican organization “Yo soy #132” is now fighting for the sake of creating an alternative way towards change. Sick of the constant failures and corruption of the politicians as well as the indifference of the people, this movement has for the first time started to defy the aristocratic system which is behind most of the decisions taking place on the Mexican political scene.

As María de las Heras from the Spanish diary El País expressed, the elections seemed to have a predictable outcome. Now, however, the young Mexicans have created uncertainty among the voters. Different sectors of the society have begun to participate in the political scene, while the group “Yo soy #132” has been working on creating discussion tables, defending their ideas, obtaining voluntary students for supervising the polls, and even organizing an additional presidential debate that will be available via YouTube.

Unfortunately, even though this movement follows a noble objective by itself, when looking at it very carefully it’s possible to realize some loose ends: disagreement between private and public schools, an ambiguous objective that begins with mediatic democracy but ends with many universal non-tangible claims such as “no to Neoliberalism”, a “non-party” approach indirectly favoring the radical, far-left candidate –while definitely banning the other one–, and worst of all, the expression of violence.

While finding a consensus among so many students from so many different universities is naturally always difficult, violently attacking the car of an unwanted candidate and mixing party interests while dealing with a legitimate cause will never lead to success. The “Yo soy #132” group must be cautious not to lose control of its newly found power or fall into the games of experienced political dinosaurs that may try to take advantage of their movement.

Nevertheless, the movement works, and a point of no return has been achieved. Even Televisa –the biggest and almost-monopolist media company in Mexico– has fallen into the trap. The British diary, The Guardian, has recently published documents that claim Televisa´s participation on Enrique Peña Nieto’s campaign by selling him airtime and preference mediatic coverage.

Even though this is not yet a proven case, it is a perfect example to illustrate how this awakening of the Mexican students has lead our country into a phase of information exigency and change that will be defined during the next months. It is now the turn of all Mexicans –and not just the students– to take some courage out of this example and strive for an electoral process that leads to a fructiferous presidential term instead of another cyclical failure.

Today, 132 students raised the voice and another one followed, but it is never enough just to scream as loud as possible when there’s noise obstructing each sound you make. Cohesion, responsibility, moderation, sensibility and appropriate action will be the only way to really achieve the development for which all these students are searching.

This picture taken by Diego Flores shows the people shouting energetically in one of the most important streets in Mexico City.

Daniel Kappelmann is a member of Global21, a student-run network of international affairs magazines and a partner of FutureChallenges.