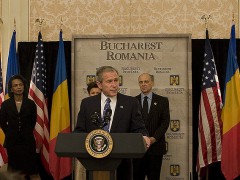 Any anniversary article on the 9/11 attacks would be impious without acknowledging the grief of all the victims and their relatives. To get a feeling for this suffering, I recommend Tom Junod’s moving piece for Esquire on the photo of the man falling from one of the Twin Towers – “falling through time as well as through space.”[1]

Going beyond this, international commentators seem to agree this year that the attacks didn’t change the world as fully as everybody expected. In the longer historical perspective al-Qaida will be seen “as a mere blip”, says Francis Fukuyama. Timothy Garton Ash believes the defining feature of world politics after 2001 won’t be Islamic terrorism, but the historic power shift from West to East, mainly China’s ascension. Last but not least, Brown University puts an unsettling price on the war triggered by 9/11: ten years after the attacks, more than 2.2 million Americans have gone to war, over a million have returned as veterans, and the government has spent between $3.2 and $4 trillion on counter-terrorist action.

What does 9/11 mean for Romania, apart from airport control nuisance and yearly anniversary talk? In my opinion, 9/11 has been the pen we diligently use to draw a fixed trajectory in our foreign policy. Going even further, public opinion, from journalists and politicians to citizens at large, has simply shunned any alternative other than being America’s most faithful Eastern ally, waging wars in Afghanistan and Iraq side by side with it, praising neo-conservatism and denouncing any liberal[2], often anti-American speech as socialism with a guise.

We sent the first infantry battalion in Iraq as early as 2002, and immediately afterwards we were invited to start negotiations for NATO accession. Although not all the figures are in the public domain, by 2008 we had already spent $350 million on supporting the wars in Iraq and Afghanistan (Source: Ziare.com). Our troops were among the last to withdraw, leaving Iraq in July 2009, having stayed there several years longer than most NATO members involved in the operations did. There was some feeble domestic political opposition to this intervention, yet our President’s allegiance to the strategic alliance with the United States was unabated. Neither media pundits nor regular citizens criticized his position. A few days ago, the Strategic Partnership for the 21st Century Between USA and Romania was signed. While most of our neighbours entered the Visa Waiver Program some time ago, we hope that our unwavering loyalty – culminating with hosting the anti-missile U.S. defense shield in a poor village in Southern Romania, much to Russia’s annoyance – will ultimately bring us visa-free travel to the U.S.

Did we have any choice other than to play the American card? Probably not. Did we go too far in playing the game? Probably yes. Given our overriding interest in becoming a first-tier EU/ Schengen member and our strategic geopolitical position[3], could we have played a more active role in EU foreign policy instead of being shackled by our purblind devotion to America? Definitely yes. Are there any credible voices in Romania that could tilt discourse in this direction? Unfortunately not.

[1] I thank the Romanian journalist and activist Dragos Bucurenci for highlighting this.

[2] I’ve used “liberal” in the American sense of this concept, i.e. Democrat, anti-interventionist, anti-imperialist, anti-Bush; “European liberals” over the years have taken a rather pro-American stance.

[3] Divided between East and West (with easy access to Central Europe), the EU’s largest easternmost member, with a generous chunk of the Black Sea coast (easy access to Turkey), and controlling a large share of the Danube basin.