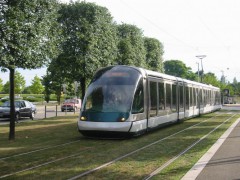 The world faces a difficult contradiction today. On the one hand we can rejoice in the economic growth emerging countries that is lifting millions out of poverty. On the other, as the scientific evidence for global warming mounts and oil prices are pushed past $100 a barrel, we have to recognize that this growth will make our environmental problems exponentially more difficult to tackle.

The European Union’s official roadmap for resource efficiency makes for some fairly dismal reading in this regard:

Over the 20th century, the world increased its fossil fuel use by a factor of 12, whilst extracting 34 times more material resources. […] If we carry on using resources at the current rate, by 2050 we will need, on aggregate, the equivalent of more than two planets to sustain us, and the aspirations of many for a better quality of life will not be achieved.

While it uncertain if the E.U.’s ambitions in this area bear fruit, it is already clear that the Old Continent provides something of a model for reconciling wealth with relatively low carbon emissions and resource use.

If an over-endowment in resources can be a curse, the example of Europe also shows that their absence can also present certain benefits. Western and Central Europe’s relatively high population density and resource poverty – as against the vast expenses and natural wealth of the United States or Russia – has always shaped its development.

This has been particularly visible since the disruptions in Middle Eastern oil supply in the 1970s. Having few oil resources of their own, except in the North Sea, European countries were extremely vulnerable to politically unreliable sources of fossil fuels from the then Soviet Union and the Middle East.

Oil dependence could not be eliminated but European leaders did their utmost to ensure it would be reduced to a minimum, notably the imposition of punitive fuel taxes. In Europe, between fuel taxes and VAT, the consumer is likely to pay around €1 per liter extra for their gas. In the U.S., the equivalent figure is 12 cents. Other differences, partly due to differing traditions and partly to policy, have led to radically different approaches to urban planning and transport. Europeans will tend drive smaller cars, have less suburban sprawl, and rely more on public transport.

The consequences in terms of resource intensity, foreign oil dependence and carbon emissions are striking. Europe, including Turkey and the Balkans but excluding the Former Soviet Union, emitted in 2009 some 4,310 million tons of CO2 (see the Carbon Atlas), which was 20% less than the United States of America and 44% less than China.

European emissions were significantly lower despite the fact that the population concerned is twice America’s and that its economy (measured by Purchasing Power Parity) is 20% larger than the U.S.’s and over 50% bigger than China’s. This represents an highly cost efficient use of carbon.

The consequences are also striking for foreign oil dependence. The U.S. imports more oil than the European Union despite its own domestic production almost equaling Saudi Arabia’s. The CIA estimated oil imports in 2009 at 10.2 million barrels a day for the U.S. as against 8.6 million for the E.U. These imports naturally come at the cost of massive transfers of wealth to oil exporters.

There is no question that the price of oil will continue to rise as emerging economies maintain their relentless grow. Italian energy giant Eni reports that global demand rose by 3.4% in 2010. The fears of “peak oil” appear overblown for the time being but as new reserves tend to be unconventional or difficult-to-reach, their cost is often exorbitant. Assuming no economic meltdown in the coming months (oil prices dropped upon mention that a Greek referendum is pointing the eurozone’s debt deal at risk), the price of a barrel of oil is likely to continue steadily rising past $100.

It is this context of simultaneous climate change and the end of cheap energy that emerging nations are undergoing their radical transformations. They are urbanizing rapidly, growing like never before and, a necessary consequence, purchasing huge amounts of vehicles (35 million sold worldwide last year, led by China with 13.8 million). Their governments would do well to consider very carefully the development of their infrastructure and the “spirit” of their cities. It could determine their ability to cope with our energy challenges for decades to come.