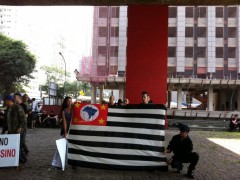 On the one hand economic globalization brings us all together – well, globalization itself does that, but anyway… on the other, people are increasingly bewildered by the lack of transparency on the part of government and enterprise.

If it’s true that worlds of information are only a mouse click away, it’s also true that governments still have an uphill struggle to go online.  I mean, to digitalize documents, publicize their actions online, and get closer to their citizens.

Not only are we overwhelmed by information, we’re equally underwhelmed by the lack of it. Much content is created by us, netizens/citizens, that is collected and analyzed by the government and its partner companies. But what about the information we need from the government about its dealings, decisions, and agreements? There’s almost none. Or at least none that we care to have.

Agreements are made without any public knowledge, agreements that might impact across the whole of society, but we hear nothing about them. And that leaves us with the feeling that we’re being left behind, that someone has something to hide from us. And there we have them: the conspiracy theories, fear, crazy ideas and everything that goes with them.

Often enough, legitimate ideas are treated as conspiracy theories precisely because of the lack of information we have about “official” issues and agendas.

At the same time, these conspiracy theories are, so to speak, “adopted” by extremist groups seeking to impose their own agenda based on fear and the masses’ lack of knowledge about what’s really going on around them.

There’s an agreement on removing economic barriers and tariffs between two countries but there isn’t much information given out on it by the government? Well, you can theorize that it’s all about allowing immigrants to push in from another country to “our own”. Then you can argue that such an influx of foreigners will lead to a serious “cultural problem” in “our own” country. Incredible? Yes, but a surprising number of people will buy it.

People simply don’t understand what the “globalized economy” means, and they fear its immediate consequences, specially when there’s a global crisis waiting round the corner to pounce on them. “We’ll be next”, they think. And there’s nothing as good as fear to fuel extremist rants. That, and the secrecy imposed by governments on its decisions and, above all, the lack of transparency and democratic participation in the whole government decision-making process.

As political parties from left to right seem more and more alike everyday, political extremes appear as good alternatives. And by “extreme” I mean racist, xenophobic, and violent groups.

The political results of the Greek Neo-Nazi Golden Down or the polls pointing to a considerable majority for the far-right Front Nationale in France are just the tip of the iceberg.

Neo-Nazi groups are growing even in Germany and hate speech against immigrants is widespread, as are government measures that pander to such hate: Remember the expulsion of the Roma population in France, led first by the right-wing Sarkozy and now by the so-called left-wing Hollande.

A neo-Nazi and Fascist demonstration in São PAulo, Brazil (2011). Photo by Raphael Tsavkko Garcia, under CC

Even in Brazil we face such “problems”, as economic growth attracts immigrants from poor neighboring countries (Bolivia, Haiti, etc). Racism and even “local nationalisms” are erupting in a country that is known for its openness and for welcoming immigrants from all over the world. Neo-Nazi groups are growing in a country that was built on migration and a mix of races, from black to indigenous and European.

It would be funny if it wasn’t so scary, but in Brazil we have Neo-Nazi groups that have among their members “mulatos” and even clearly black individuals. They hate gays and other minorities and also immigrants, and they loathe the people from the northeast part of the country, but they see no problem in having members that would make Hitler choke with rage.

It’s a kind of “globalized Nazism”, a mix of ideologies, with a heavy Brazilian cutural imprint. In short, it’s both stupid and… funny. But also dangerous.

Fringe and radical groups defend the independence of the predominantly white south of Brazil based on pure racism, while others defend the independence of the richest state of Brazil, São Paulo, based only on prejudice against the poor people of the north and northeast of the country. And some of these groups are now targeting the already vulnerable migrant population.

Such groups pose a threat to minorities and the migrant population, but everyday they find some sort of echo among the middle class and general population. And it’s a worldwide phenomenon.

It doesn’t matter if one particular country has significant economic growth – or at least enough jobs for a large number of the people. We’re talking about a globalized market, and in a globalized market people will migrate for better jobs just as ideologies will spread from country to country.

Another important thing to note is that “economic globalization” is not only what the phrase seems to indicate. We’re also talking about an increase in migration, about mobility, and about an information overflow that leads to uncertainty, more questions and even more doubts.

It’s easier now to get info on new job opportunities elsewhere in the world, and also to move from one place to another. That leads to increased worldwide mobility as well as resentment by the local population over the influx of migrants who might be “stealing” jobs. It’s just as easy to manipulate resentment and contradictory feelings as to impose an extremist agenda based on this dichotomy of too much information and too little information.

An economic system should not be based on secrecy by the government and companies, but based on the idea that we must share, that we must be one. We must be on Facebook, sharing content and information. But it’s unidimensional – we share, they collect info and we end up with nothing. And that leads to… Well, what it leads to is obvious.