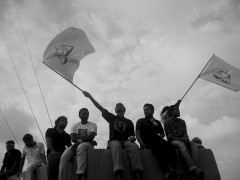 Calling for Justice? An MDP protest against the coup; Photo by Dying Regime on Flickr (CC licensed)

The Maldives’ Former President is Not About to Go Quietly

In the European mind, the Maldives is a tranquil island paradise of exotic settlements and sun-kissed beaches. In February 2012, the archipelago’s president was Mohamed Nasheed, 44, a charismatic man admired by environmental campaigners for his impassioned calls to reduce carbon emissions. Nasheed was feted by Western leaders for his commitment to democracy, assuming power in coalition in 2008 in the first directly democratic elections in the Maldives since the end of British rule in 1965. He had struggled to bring democracy in his nation for almost 20 years against then-president Maumoon Abdul Gayoom.

In February 2012, however, Nasheed resigned in controversial circumstances. His time in government had not always been rosy domestically: cabinet ministers from other parties in the coalition resigned in protest against his alleged lack of respect for the Maldivian constitution. Following protests in the capital city Malé, Nasheed stepped down. Originally he accepted that the people wanted a new leader; he pledged to obey their wishes.

Since then, however, Nasheed’s story has changed: he accuses forces loyal to Gayoom of forcing him resign at gunpoint and manipulating the Maldivian judiciary. As of November 2012, he faces trial for the illegal arrest of a judge whilst in office. It is a dramatic fall in his homeland for a man once so popular internationally. It is unclear if we can accept Nasheed’s version of the story; the circumstances behind his resignation and his flouting of a court order to remain in Malé give food for thought.

In a column for the New York Times, the day after his resignation, Nasheed alleged that his fight for democratic reform had been doomed from the start. He claimed that as the Maldivian legal system consisted mostly of judges handpicked by Gayoom, the former president was thus protected and no charges could be brought against him for alleged abuse of power.

Nasheed argued that Gayoom’s legacy was a barrier to progress from the start: loyalists to the former president have, he said, thwarted attempts at democratisation. Furthermore, Nasheed claimed that “police officers and army personnel loyal to the old government mutinied and forced me, at gunpoint, to resign”. He painted a picture of himself as a true reformer, committed to making his country a modern democracy.

Nasheed’s account was largely corroborated by the report, although it did not claim that the “coup d’état” was planned far in advance. It is, however, worth remembering that such a report commissioned by a party is likely to contain bias. In fact, an official inquiry in the Maldives dismissed Nasheed’s claims and concluded that he had stepped down voluntarily. The inquiry accepted that there were current problems with the rule of law in the country, particularly police behaviour, but its findings largely backed up the claims of President Waheed’s new government. This inquiry, however, is not necessarily independent of the government, and so claims made by both sides are still highly disputable.

Human rights, such as freedom of speech, had improved during Nasheed’s time in office. They have slumped in the year since his resignation.

A less clear picture emerges when considering the circumstances surrounding his arrests in April and October 2012 following his resignation. The first was for violating a court order not to leave Malé; he fled the capital having been released from detention on the condition that he returned for questioning. He was again arrested on 8th October, for repeatedly ignoring court summons for illegally arresting a judge. The MDP in turn have accused the government trying to prevent Nasheed running in the next elections, scheduled to take place by July 2013.

The overall picture, then, of Nasheed’s battles with the new government and the Maldivian courts appears to be mixed. There are conflicting stories over the reasons behind his resignation and a lack of clear-cut evidence on either side. The reaction of the new government to the scheduled elections will be telling. Nasheed portrays himself as a revolutionary democrat, but if the July elections are free and fair, it will prove that the new government is also able to conduct elections fairly, thus weakening his appeal.

Although he is admired internationally, Mohamed Nasheed’s domestic reputation is more suspect: the result of the court case and the way it is conducted will go some way into illuminating which side is in the right.

Richard Mathers is a member of Global21, a student network of international affairs magazines and a partner of FutureChallenges. A longer version of this article was first published in The Oxonian Globalist.