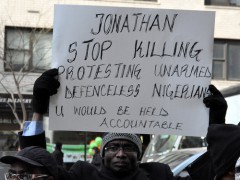 Boko Haram, an Islamic extremist group sometimes called the “Nigerian Taliban”, has carried out increasingly sophisticated attacks since its founding in 2002. Targeting government organisations, churches, schools and mosques belonging to rival Muslim groups across northern Nigeria, its attacks have killed more than 1,000 people of both faiths in the last four years.

Boko Haram’s recent escalation from small-scale shootings to sophisticated high-powered explosives has fuelled speculation that the group is linked with other radical organisations. In a recent interview with The Guardian, Boko Haram’s spokesperson confirmed that they ‘enjoy financial and technical support’ from al-Qaeda. However, analysts suspect that Boko Haram has split into different factions, only some of which have links outside Nigeria. Their reach and concerns, after all, are still overwhelmingly domestic.

A Government at War with Itself

Claims of allegiance to al-Qaeda may be a ploy to boost the group’s credibility, while deflecting accusations that Boko Haram harbours internal allies amongst northern politicians. These northern elites feel betrayed by current President Goodluck Jonathan, who failed to honour Nigeria’s power-rotating pact between the Christian south and Muslim north. Hence there are rumours that they are discreetly supporting Boko Haram, in order to make the country ungovernable and ensure the return of political power to the north.

Northern elites’ alleged involvement may help to explain why the current administration has handled the situation with such disquieting laxity. Following the 2011 Christmas Day attacks, Jonathan provoked ire by calling the bombings “one of the burdens we must live with.” He conceded that sympathisers of Boko Haram had infiltrated his government, the armed forces, and the police, a fact evident from the group’s possession of high-level intelligence, enabling it to evade capture.

The combination of escalating sectarian violence and inadequate government response has led to murmurs of impending national breakup. Under British colonial rule, Nigeria’s north and south were governed as separate protectorates, signalling regional tensions that Boko Haram seems eager to reignite. The group has explicitly called for all southerners to leave the north, prompting retaliatory violence against Muslims in the south.

Despite these tensions, there are good reasons to believe Nigeria will stay united. Although moderate Islamic leaders have not forcefully condemned the group’s attacks, Boko Haram does not represent the majority of Muslims. There is a national sense of solidarity in endemic poverty, particularly visible from a nation-wide strike in January 2012, when Christians and Muslims marched side by side, protesting the removal of the government’s fuel subsidy. Finally, northerners are loath to lose control over the South’s abundant oil reserves, especially in the aftermath of Sudan’s tumultuous division, which has failed to produce a viable oil-sharing agreement.

Outwardly, the emergence of Boko Haram may appear to be a religious issue. However, it masks larger political and social problems within Nigeria, including the creeping risk of state failure and disappointment with the current administration. The threat of division is unlikely to materialise, but if the government does not strengthen its response to the growing sectarian violence, it may not last out the year.

Temisan Boyo is a member of Global21, a student network of international affairs magazines and a partner of FutureChallenges. A longer version of this article was first published in The Oxonian Globalist.