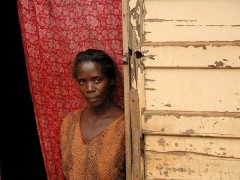 Woman in Uganda at the door of her house. Credit: Jennifer Wilmore. (CC BY-NC 2.0)

Agnes Namagembe is one of 4.2 million Ugandans living in urban areas. Like the majority of Uganda’s urban dwellers, Agnes lives in the capital, Kampala.

Like many other African cities, Kampala is informally divided between up market and low market residences. The rich live in upmarket areas of the town like Kololo in cutely manicured heavily gated communities. Kololo boasts a luxurious living environment with high-class houses, beautiful landscaping, and well paved and tarmaced roads. Top government officials and private sector CEOs live here.

The urban poor, on the other hand,live in conditions of squalor in densely populated slums like Kamwokya. The upper part of Kamwokya, which neighbors Kololo, is a rich man’s palace buzzing with NGO and the consultancy offices of Uganda’s middle class. Yet the lower part of Kamwokya is one of Kampala’s most notorious slums, a place for drugs like marijuana, filled with unsightly shanties with inadequate sewage, unhygienic conditions, and often with illegal connections to the electricity grid.

In this tale of two worlds in one city is Agnes, a poor woman who lives in Kamwakya’s slum area and makes ends meet by taking in laundry. Agnes lives in a single room rented at 40,000 shillings ($16) a month. It is what she calls home. The house with the room she rents is not easy to pinpoint as it is surrounded by a confused mass of other shanties. No car can access her home as there is no road that leads there. She uses a narrow path squeezed between shanties to reach her room. If you are looking for privacy this is a wrong place to live. Grown-up children share a room with their parents. Sanitation is poor.

Agnes’ economic struggles rotate around two basic things: rent and food. There is no leeway for savings.

She said life was quite good when she was selling sweets and bread on Kampala’s streets until the city authorities kicked street vendors out. The market stalls that the city authorities provided as an alternative are too expensive for Agnes as a stall costs at least 150,000 shillings ($60) to rent – or almost four times what she pays for her room. She turned to laundry to make sure that she has a roof over herself and two children. She goes to people’s homes washing their clothes and the money she earns is enough to pay her rent and have one meal a day.

With her severely limited economic opportunities, Agnes is completely unable to provide good education for her children. As a poor slum dweller, Agnes cannot make things happen in her community in a big way for she has no means to do so. But she does make things happen for her two children whom she looks after single-handedly in her own way as a poor single mother. The father of her two children dumped her. And she is now pregnant from another man who won’t even marry her.

Agnes’ story echoes the plight of many poor urban women living in Kampala. They are the mothers of the nation who are facing enormous challenges.

When I asked my colleagues to describe what it’s like to live in Kampala city as a poor woman the answers were many and varied. Some answered quickly, others took their time to think through the response.

One colleague responded: “It is a disaster,” which was a dry answer; I thought at first. In fact it was not until I sat down with Sylvia Akello that I came to appreciate what her response meant.

Each morning when I go for work I see Sylvia on the roadside, frying cassava and sweet potatoes for sale. She makes daily sales of 5000 shillings or about $2. Sylvia’s struggles are just for basics like rent and food. At 25, Sylvia is another single mother fending for her two year-old son. “Life will get tougher when my son starts school,” she says, “but I will work harder even if it means sweeping the streets I don’t want my son to suffer like me.”

It is tough for a poor woman to live in a city like Kampala, another colleague told me. “You have to forget about a nice lunch or breakfast or supper. Sometimes she has to walk to work and back in order to save money for the rent and a bit of makeup. In most cases, she is paid peanuts for the dirtiest and most soul-destroying jobs like hawking fruits and other stuff,” he said.

Poverty statistics show that women are poorer than men. Such gender disparity is fueled by imbalanced power-relations. In most communities in Uganda the majority of women own no property. Even when a man acquires property he will register it in the name of his male child instead of his wife. Here, in many families education for girls just isn’t a priority.

Yet on the other hand, you have growing numbers of corporate women who are salaried or chief executive officers of companies and women-focused NGOs. These are very rich. Some are richer than men. They are extremely independent. They drive nice cars, live in nice houses, own property, provide good education to their children, go on vacation abroad, etc. They rarely associate with ordinary poor women like Sylvia and Agnes. In Kampala, as in many other cities across the world, poor and rich women live in different worlds.

Amidst these struggles, there are those remarkable women who have stood up against the odds to earn a living. One woman in Wandegeya market in Kampala has found gold by selling banana skins to rich diary farmers.  She collects the peelings from market food vendors and transports them to dairy farmers who pay her and mix the skins into animal feeds. It is through such imaginative forms of enterprise that more women will be lifted out of poverty. Innovative ways of earning a living deserve support from government and private entities as they help close the widening gap between the rich and poor.