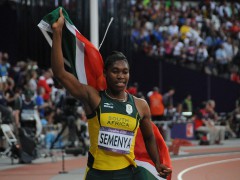 The International Olympic Committee is certainly not bashful about proclaiming its lofty ideals. The Olympics, it says, is about placing sport – silver platter style – at the “service of humanity and to thereby promote peace”. The iconic Olympic rings themselves signify a kind of brotherhood or “union between men”. And the Olympic ideology finds its core, of course, in the grand and noble concept of the “level playing field”; a global space where all men (notice that women tend not to be mentioned much) compete as equals.

But anyone who has recently brushed up Marxist theory might remember the argument that ideology can only ever be an illusion, an unattainable ideal. And when I look at the Olympics – for all the media distraction, the incredible talent, the impossibly sculpted bodies, the drama and excitement – I can’t help feeling there is a renewed pertinence to the old man’s ramblings.

And if you can adjust your eyes so as not to be dazzled by all the lights and flash photography, you won’t have to look too far to see what I am getting at. With a few commendable (mostly Kenyan) exceptions, there is a distinct lack of African athletes and African nations winning medals in London. The fact that the few Africans that have won medals are so gushingly commended for their ‘against the odds’ glory only makes the general absence more glaringly obvious. Even in South Africa, Africa’s largest and richest economy, our very mediocre haul of six medals has been celebrated as if it was 600.

More obviously revealing still is the overall medal count. The top ten medal winning countries in London were as follows: the US, China, Great Britain, Russia, South Korea, Germany, France, Italy, Hungary, Australia.  What about Rwanda, Congo, Senegal, Gabon? They were all there flaunting their traditional wares at the opening ceremony, but has anyone seen them since? Maybe the Olympic Committee forgot to organise the bus for the Africans and they are all still waiting patiently (Africans often have to wait a long time for the bus) at the Olympic Village.

Whatever the case, this phenomenon is far from limited to the most recent Olympic Games. Look back to Beijing, Barcelona, or Sydney and a similarly disparate picture emerges. And before I risk getting too Afrocentric, the rest of the developing world also tends to find itself at the wrong end of the table – Tajikistan anyone?

Interestingly, work by Loek Groot has shown that even high-ranking China should actually be winning considerably more medals if medals were to be distributed according to representative countries’ percentage of the overall Olympic population. In London, China won 38 golds whilst their projected tally based on Groet’s research should have been 62. The biggest underachiever of all, however, is India, the world’s largest democracy and a fellow BRIC member. India has won only 25 medals in all Olympics since 1900.

On the other side of the coin, little old Britain, France and Germany are all punching far above their respective citizenry’s weight. And they are not alone: overall around 80% of the medals are going to 20% of the world’s population. Britain, for example, with its population of just 60 million, won more medals than all the African teams combined in London.

Anyone who has spent much time in Africa will not need much convincing as to why this disparity might exist:- level playing fields of any variety are a pretty rare sight there. The average Congolese, Nigerian or Kenyan sports field is as treacherously jagged, undulating and uneven as the Himalayas. And with similarly bumpy economic histories spiked with bouts of devastating violence, how can anyone possibly hope to do more than fill in a few potholes from time to time?

In this respect the developing world finds itself in a Catch 22 situation. For many Olympic athletes and teams, funding is closely linked to performance. That is to say, if you are not winning medals, you are not going to get funding. But how can the developing world be expected to take medals from the grasp of the developed world when they cannot afford the same kind of infrastructure, facilities, and training?

Training athletes certainly isn’t a cheap business either. After the Beijing Games, an Australian official estimated that his country’s gold medal winning athletes had cost around $40 million each in training, conditioning, and so on. How could ravaged African economies ever justify that kind of expenditure on a single athlete?

So it is that many spectacular individual athletes from the developing world tend to be trained abroad, mostly in the US (this is true of all South Africa’s medal-winning swimmers).  This does little to raise the bar back home on a wider scale. In South Africa, although our resources, infrastructure, and training facilities surpass those of many other African nations, it is still estimated that only around 10% of our schools have proper sports facilities.

Some observers justify the poor performances of developing nations at the Olympics by highlighting cultural differences. The argument often goes that Indians, for example, love cricket and don’t really care about the Olympics. The exceptions can be similarly explained: the consistently high performance of Kenya in distance running is put down to the fact that Kenyans have grown up running away from lions or running 25km to school.

Though perhaps not entirely incorrect, this is, however, a gross oversimplification. What people fail to see is that a new culture can be nurtured by representative governments, but only if there are obvious gains. The International Olympic Committee should be doing more to help level the playing field for developing nations and encouraging more widely distributed investment in both Olympic performance and Olympic culture. Taking the Olympics to Brazil could certainly be a step in the right direction, and African capitals, including Durban, look set to bid for the 2024 Games. But a change of location still isn’t enough to guarantee a fair fight.