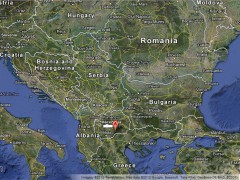 Location 41°09′25″N 21°56′47″E holds lorandite, a mineral which hides the secret of what is happening inside the sun and maybe the secret to fast economic gains for Macedonia. Allchar’s location on Google maps.

There is only one place in the world where the mineral lorandite can be found in its purest form and in such vast quantities.  That place is Allchar (Alshar) and is located in the Kozuf mountain Kozuf in Southern  Europe, more precisely in Macedonia. Lorandite is important for science as it holds the neutrino particle, known to be able to generate “sun energy”. If scientifically investigated, it can help us understand processes that occur inside the sun.

Macedonia has never exploited these deposits rich with gold, arsenic, antimony and thallium. Neither commercially, nor scientifically. Only one research project was launched in the last years of a united Yugoslavia with no state-financed research project ever since. In 2009 the Parliament of Macedonia enacted a law proclaiming Allchar a natural monument. This meant that Allchar became a protected area, that scientific research depends on agreement from the Directorate for Environment, and that the only type of economic activity allowed is ecotourism. However, in February 2012 the Ministry of the Environment proposed a draft law to annul Allchar’s status as a natural monument; three months later the law was adopted in Parliament. The new law allows geological research to estimate the amounts of economically significant gold, thallium and antimony ore, but it further gives the go-ahead to the significant Lorex (Lorandite Experiment) project. So, the motifs for this law are twofold: to use Allchar to make the country both economically and scientifically attractive.

Obviously, the scientific value of exploring the Allchar mine should not be questioned. However, scientific exploration was not forbidden under the previous law. This indicates that the change of Allchar’s status is primarily driven by economic considerations. Macedonia has no natural resources, no driving industries, and has not been able to pave the way to becoming an economic miracle as Ireland or Singapore have done. It is believed that Allchar holds 20 tons of gold, the value of which at gold market current prices is around 943 million euros. No small amount, by any means. By offering it under concession (most probably to a foreign investor), the country expects to reap the fruits of the mining operation.

However, the environmental consequences once extraction begins have hardly received a mention.  An initial evaluation of the external consequences of this new law by the Ministry of Environment shows that the only consequence of this change in policy will be in terms of the environment. But what kind of impact will it have on the environment? The answer is we just don’t know. There has been no public discussion, and no experts have been asked to comment publicly. So, we’re left in the dark. We have this precious mineral and we don’t know once it is commercially extracted what the repercussions on the environment or the people of the surrounding region will be. At the same time, instead of increasing the range of protected areas – which by European Union regulation should reach 20% by the year 2020 – the percentage of protected areas in the country remains at a low 7.3%. Even so, it’s not too late: an environmental impact study involving all relevant stakeholders should be conducted prior to offering the concession on the mine.

This is directly linked to safeguarding the natural wealth of Allchar. Because between the moment when the mine loses its natural monument status and the moment when the foreign commercial prospectors arrive, Allchar remains unprotected. This status leaves this natural treasure of world significance vulnerable to thefts.  In April 2009 (when the mine didn’t have the status of a natural monument), the Macedonian police caught a foreign group of six individuals, including two university professors, who had illegally extracted 400 kilos of ore from the mine and were planning to take it out of the country. The detainees were soon freed, so it is possible that similar intrusions on the mine could happen again.

It is also possible that they will not, and that the negative recupercussions will be minimal and can be easily off-set. Maybe Alshar does not only hold the secret of the sun, but also the secret to Macedonia’s economic reinvigoration.