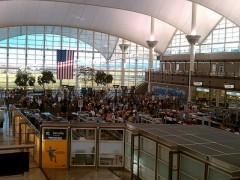 This summer I was on a flight from Australia to Japan. I took my shoes off at security, just like I always do. But this time, my gesture drew little smirks from the others nearby. I looked around: no one else had their shoes off. Someone commented to me with a polite smile, ‘You must be American’. I was embarrassed.

Ever since the 9/11 attacks, we Americans have adjusted to, among other things, more stringent airport security. We don’t always like it, and we sometimes even protest it, especially when it lengthens our travel times or invades our privacy. But we do understand that this is part of the effort to prevent our commercial airplanes from ever being used against us again. On the other hand, when countries like Australia don’t follow suit, I can’t help but wonder: are Americans overreacting to the risk?

Risk is commonly defined as the probability of some bad event happening, times the magnitude of the damages if it does occur. A major terrorist attack might be unlikely, but if it happens it would cause great harm. Thus it constitutes a large risk. But risk is as much about emotions as it is about numbers. 9/11 is an excellent example: the damages are not just measured in lives lost and the construction costs of rebuilding, but also in the psychological toll of everyone in America and beyond that was moved by the event.

The numbers and emotions both also matter for risks of events that haven’t happened yet. When we feel threatened by something, we’ll think the risk is larger. For example, the risk of humanity being wiped out by an asteroid stays basically constant over time. (Technically, the risk declines very gradually as asteroids clear out of Earth’s neighborhood.) But our concern about asteroid disasters could go up if asteroids are in the news, or if there’s a big Hollywood movie about them. The news or the movie can cause us to worry more about asteroids, even if there’s nothing new to worry about.

I’m not worried about asteroids. Sure, they could destroy humanity, but that’s very unlikely, and meanwhile NASA’s keeping an eye out for them. There are much more likely, more urgent threats out there. For these, I’m worried that people don’t worry enough.

Perhaps the best example is disease outbreaks. We’ve had several recently, including SARS and the H1N1 and H5N1 flu strains. Each of them sounded alarms within the public health community and prompted several responses. I was teaching during the 2009 H1N1 outbreak; my university told me to let anyone reporting flu-like symptoms stay home without the usual doctor’s note. While these disease outbreaks did cause considerable illness and death, they fortunately did not turn out to be the catastrophic pandemics that some initially feared.

And hear lies the challenge of anticipating catastrophes. Every time a new disease breaks out, there’s tension between public health workers and the public. It takes the public health workers some time before they can figure out just how severe the disease is. Until they can rule out a catastrophic pandemic, they’re inclined to err on the side of humanity being over-prepared. But the rest of us don’t always appreciate this. If drastic precautions are taken – school closing, quarantines, etc. – we might panic. And when precautions are taken and the disease turns out to be mild, we get mad at the public health regime for overreacting.

When we face possible catastrophes – whether from terrorism, pandemics, or anything else – I think we should hope for the best but prepare for the worst. We should not get mad when people try to protect us. (Though we should keep an eye out for overreaching governments drifting towards totalitarianism, as I discussed in a previous article.) Instead, we should make our own preparations. That includes preparations like having medicine available, or maybe some extra nonperishable food. But it also includes mental preparations, so that we know when to take threats seriously. To that effect we should all strive to educate ourselves so that we can help ourselves and our communities stay safe.