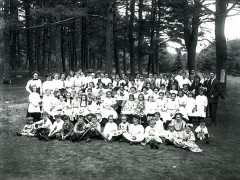 Generations of children have been in school since forever. The most lucky ones were taught by gifted teachers. Source: Keene Public Library and the Historical Society of Cheshire County

In 2010, the Boc government implemented austerity measures in Romania’s public sector, introducing 25% cuts in salaries and 15% cuts in pensions. Mrs. B. is one of many who was cut to the quick by this move. A high school teacher with over 10 years’ of experience, Mrs. B was already scraping by on a pittance in a country where a pre-university teacher makes something between 200 and 400 euro a month.

“In 10 years, I’ve taught some 2000 students from maths-info classes. I love teaching because the interaction with teenagers helps me in communicating well at any time. It’s a wonderful job, it’s both creative and spontaneous, and it matters so much what you say and how you say it so you don’t bore the youngsters. They understand everything so fast nowadays, they can’t be fooled”, says Mrs. B., a passionately dedicated teacher who also trains students for the International Olympiad in Informatics.

“I love the challenge! But the rewards are ridiculous. In 2011, I received 300 lei – that’s under 100 euro – from city hall because one of my 11th grade students won a medal at the National Olympics. What’s more, around 25% of the 12th graders choose informatics for their Baccalaureate”, explains Mrs. B who maintains a very close relationship with her students, both present and past. “Every year, for Christmas, I meet the ones I trained for the Olympics. We have a cup of tea together or go to the theatre”, says the 35 year old teacher and mother of two.

With a full time teaching job and as a master class teacher, Mrs. B earns around 270 euro a month. “The temptation to quit teaching for a job that brings more money has always been there. It’s my husband who supports our family and, of course, it makes me bitter that there is no comparison between the effort I put in and the pittance I make. The only satisfaction I have is in seeing the successes of my students”, says Mrs. B who, in 2010 after the cuts kicked in, made 140 euro per month for working half days. “I decided go on part time work because I wanted to do something else that would bring more money. So I used to help out my husband who works in design. At school there was much talk among teachers about how to resist the austerity measures. We held strikes but I disliked them because the children are the ones who suffer, even if theoretically I understood the need to do something.”

The cuts brought changes in family life too, because Mrs. B.’s husband was also affected by them even though he works in the private sector. “We had less money to spend, but we also tried to look on the bright side. Less work meant more time with the kids and dreaming up ways of spending time together without having to spend much money. We walked more, slept more, and ate healthier. Even so, poetry doesn’t work indefinitely, and I’m a bit worried that our resources will eventually run out.”

Even if Mrs. B. looks on the bright side of things, she still believes that decent financing, coherent laws and transparency are the key elements of an educational system that would satisfy all concerned parties: students, teachers and parents alike. As she ruefully comments, “The fate of teachers in Romania is so sad that my son made his primary school teacher cry when he said he would like to become a primary teacher like her when he grows up.”

Though hope and optimism for better times can help people weather tough financial periods, the truth is that austerity measures affect everybody, especially when no coherent policies to restore growth and prosperity are anywhere in sight. Mrs. B. is just one of many such cases and, sad to say, it is not even one of the worst.