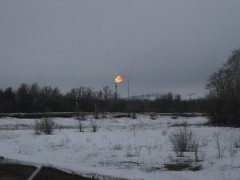 Russia is the largest country in the world – that’s what all the Russian kids learn in school. The next they learn is that it’s also one of the richest countries in the world. Then, an average geography teacher, with a regular salary of about 600 US dollars per month, usually sighs and re-tells an old anecdote: „If your country is so rich, why are your people so poor?“

The resource-orientedness of Russian economy is historical: Russians were trading furs, than grain (up until revolution, grain was the main export resource of the Russian Empire). Since late 60’s of the XX century, when the massive resource deposits were developed in Siberia, Russian economy, found a new resource drug – oil, and more importantly, natural gas.

It is. A lot of these resources, however, are hard to access, and even if accessed the costs of transportation to the final customer would make them so expensive it would be inefficient to sell them. Yet, gas and oil together with steel, nickel and coal are expensive enough to transport them even for several thousands kilometers.

Resources and their primary derivatives constituted 98 percent of Russian export in 2010, while the raw resources (like crude oil, gas, metals, etc) accounted for 50 percent of exports.

In the Russia’s budget, revenues from oil and gas constitute nearly half of all revenues. Yet, the government doesn’t disclose the detailed structure of the revenues, therefore it’s hard to estimate the exact share of the ‘resources’ ,in a broad sense (including primary derivatives that do not need excessive technology or human capital), in the country’s economy.

Russia is rich, but Russians, in their majority, are not. While Moscow hosts 27 US dollar billionaires (in 2008, Moscow even outranked New York in the Forbes’ billionaire cities list) and nearly 100,000 millionaires, the social inequality is as 1,5 times as much as in Europe (yet lower than in China). The Gini index, a statistical tool used to measure social inequality has been increasing (with a little positive dynamics in 2000s) since the collapse of the Soviet Union.

If we take a look into the „Resource Curse” debate, we would see different solutions offered by politicians, activists and analysts.

1. „Russia as the Energy Super-Power,” a somewhat ideology, meaning that the country rich in resources shouldn’t be ashamed of being rich with resources and shouldn’t restrain itself from using unusually high oil/gas revenues to solve social-economic problems. In other words, „Energy Super-Power” concept is a denial of a resource curse as an issue. „It’s not a bug, it’s a feature!” This concept was expressed by Vladislav Surkov, deputy head of President’s Putin administration back in 2006 (the concept might change its title now, but, in fact, it didn’t change its substance):

If you have strong legs, you’d better practice long jumps than chess. […] We should use things in which we’re already proficient, and improve them. Concept of Russia as an Energy Super-Power, I think, fully fits this approach.

The supporters of these theory, however, don’t take into consideration the size of the Russian population, factor reducing re-distribution to a pure populism with no real effect. As Vladimir Milov, Russian energy analyst, ironically points out: „Too large population prevents from turning Russian into a successful „Petrostate.”

To sum up, re-distribution taken simply can’t be a good solution for such a big and populous country like Russia.

Investing in the future, is indeed important. Unlike plain re-distribution, it contributes to sustainability and progress. Without transparency, however, this solution can be profanated and lose a popular support thus preventing it from a serious advancement.

4. Saving for the crisis. Back in 2004, when oil prices on a rise, someone could barely imagine the downfall of 2008-2009. Yet, there were economists, who understood the cyclical nature of the modern capitalist economics. Yegor Gaidar, former prime-Minister, was the major evangelist of the Stabilization Fund, a „part of the federal budget to balance the federal budget at the time of when oil price falls below a cut-off price, currently set at US$27 per barrel.“

The idea behind the Fund was that since the oil and gas prices are so volatile, a rational government should keep a part of the money in order to ensure itself from a sudden market recession.

Retrospectively, it is evident that it was the Stabilization Fund that prevented Russia from getting into a serious recession (like the one in 1998) in 2008-2009. Of course, Russia suffered crisis together with the most world’s economies, yet without the oil money put into this fund, the downfall would be truly epic.

Big and rich countries are doomed to bear the resource curse. It simply can’t be avoided. Especially, when it comes to the countries with short or no history of transparency and accountability institutes.

Yet, a number of things can be done in order to minimize the consequences of it.

First, investment in the future instead of plain re-distribution. It is important to note that this investment should be transparent and accountable in order no to profanize the idea.

Second, the oil- and gas- dependent country should ensure itself from the market risks by creating the stabilization fund.

Finally, resource curse is an issue and shouldn’t be made an object of pride or a tool of an aggressive foreign policy.