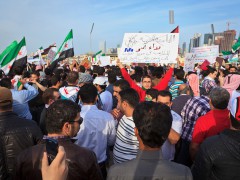 From Syria to Tunisia to Scotland, people seem to be taking political processes into their own hands. Are we shifting from a heavy reliance on those who once ruled and held complete power to building governance from the bottom-up?

If given the opportunity to do the same, would Australia take part? There has always been an emphasis on ‘Power to the People’ accentuating the need for freedom, equality, economic stability and over all, peace. However, without a monarchy, how would our country function?

We turn to the latest cry from Scotland to host a referendum in 2014. This is the second pledge by the Scottish National Party (SNP) leader Alex Salmond to hold a referendum. He truly believes Scotland is prepared to become independent. Scotland is a country of incredibly passionate and patriotic people. This can be noted through their rugby supporters through to constant parades of Scottish pride in the streets of Glasgow and Edinburgh. However, when questioned about their ability to become independent, the community is divided.

BBC Political Reporter, Andrew Black, when questioned about whether or not Scotland wanted independence stated, “Hard to say with any great certainty at the moment. There is no shortage of polling data on the issue of independence, putting support at various levels.”

Alex Salmond and David Cameron confirm the referendum, October 2012, by The Scottish Government on Flickr, CC-BY-NC 2.0

The British Social Attitudes survey is the only exercise of its kind that has asked the same question on the community’s preferences going back to the foundation of the Scottish Parliament in 1999 during the devolution.

John Curtice, British polling expert, says support for independence has tended to “oscillate between about a quarter and a third, with the latest instalment of the survey, published in January, suggesting the figure is at its lowest level since the creation of the Holyrood parliament in 1999.”

Overwhelmingly, only a total of 23% of the 1,229 people questioned between July and November last year said they favoured the proposition that, “Scotland should become independent, separate from the rest of the UK”.

What is strange about the coming possibility of change is that the Scottish people are rather tightlipped about the whole affair. When attempting to find talent to talk to for this particular article, most declined the offer saying that it was “too controversial at the moment”.

The motivated and passionate folk of Scotland had baffled me until I spoke to one of my University lecturers who said, “it all comes down to history.”

In Scotland’s history, right back to the time of Highlanders such as William Wallace, the two countries have been fighting for power and independence. Despite how times have changed, the despise towards those who once conquered their amazing native land still courses trough their veins and thus fuels the current strive for independence.

Of course there are many other factors, and the SNP are constantly highlighting these along with the pros and cons of separating Scotland from the Monarchy. However, should Australia do the same?

When comparing the reasons as to why Scotland wishes to become independent to Australia, I can personally see a few similarities. Now of course we didn’t have men battling the English in rolling hills wearing kilts, but isn’t our culture completely different to those in Great Britain? (you say there are similarities – elaborate on that a little for people who don’t know our cultures well J )

Australia is an isolated country with a strong democracy and a unique culture quite separated from the British, and yet we still rely on the Monarchy. Is this a necessity to our livability and ability to function as a nation? This debate has been considered since 1996 and still lingers in the minds of politicians. However when considering the pros and cons of this possibility, similarly to Scotland, what are the risks and are we ready?

From a personal point of view, again similar in nature to the Scottish referendum, I believe that neither country is ready to operate on their own. The break down of politics and the economy when the Republic of Ireland gained independence in 1922 is evidence enough. Furthermore, without the Commonwealth who would be Australia’s allies? Who would protect Australia? Would our economy crash? How would the content of the Constitution be altered? These are all areas that ring alarm bells when considering Australia standing alone in the world. As Opposition Leader Tony Abbott said in November 2006, “Monarchy is the tie that binds us together.” So then it seems that we are shifting, and perhaps as a greater community we ultimately desire change, but we are still a fragile and young country and perhaps we’re not sure of the limit of our independence just yet.