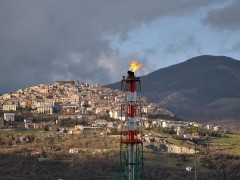 Basilicata is a region in the south of Italy, bordering on three other regions – Campania, Puglia and Calabria- and two seas – the Tyrrhenian and Ionian. In many ways it represents a typical Italian paradox. Basilicata is my region and I love it.

Basilicata – or Lucania if you prefer – is the only region in the south without any history of organized crime. It boasts one of the highest school rates in the whole Belpaese, the lowest population in the south – 610,000 souls, and the third lowest in the country. It includes a district of Rome and a huge treasure trove of natural resources, including national parks, beautiful woods and mountains, beaches with crystal clear water, water resevoirs, gas and –did you know?- the largest oilfield in continental Europe.

Maratea “The Pearl of the Tyrrhenian”. (Wikipedia, CC BY SA 2.0)

Oil was first discovered by the farmers of Val D’Agri, who from time immemorial saw “tongues of fire” periodically emerging from the surface of their fields But the first to find black gold in the area were employees of AGIP –the General Italian Oil Company- who in 1933 conducted geological surveys and subsequently registered the presence of hydrocarbons. The true potentialities of the reservoirs only started to become clear in the late 1980s though, with intensive exploitation beginning 10 years later in 1998 when the Regional Assembly granted extraction permits to ENI and in 2004 to TOTAL. Others have since followed.

Today oil extraction in Basilicata represents 80% of Italy’s total production. It meets 7% of the country’s oil needs with a production of almost 90,000 barrels a day, and with plans to reach the 160,000 mark in the next two years. This might sound great, yet in the midst of all this wealth the region and its local institutions are getting just a measly 10% of the royalties.

The dream of economic development, driven by the flow of money that oil generally brings that was born 15 years ago, swiftly became a nightmare. After more than twenty years of large-scale exploitation, Basilicata that once dreamed of becoming the “Texas of Italy”, is now facing widespread environmental damage, soaring cancer rates, wrecked agriculture, undeveloped infrastructure, low tourism and above all a huge emigration rate both internal – from small to larger centers – and external – to other Italian regions or abroad.

In short, Basilicata has significantly worsened its social and economic prospects, and its per capita income is now among the lowest in Italy, second only to that of Calabria and constantly on the decline over the past few years.

Today almost 30% of the region’s territory is affected by the oil industry and new explorations are being made each month, on the ground and in the sea. And there is no let up in the demand for new concessions.

A wide cast of actors shares responsibility for this abject failure. First of all a catastrophic political and administrative class which had neither the ability nor the competence nor the honesty to manage such a big and complex issue. Then the people of the region themselves who for too long let the empty promises of work, easy wealth and future prosperity dupe them.

The past few years though have seen the emergence of numerous movements and associations demanding clear controls for deal with environmental damage, more investment in development and a stop to further exploitation. Recently the Corriere della Sera, Italy’s leading newspaper, dedicated a whole special investigation to the history of the oil industry in the region and its nefarious effects.

Personally I am not opposed to gas or oil and not even to nuclear energy. I think that, in part also due to the bad decisions made over the past decades, Italy is too dependent on foreign countries for its energy supply. Many of these countries have very shabby democratic credentials as evidenced by the “Shalabayeva affair”, in which Alma Shalabayeva the wife of the Kazakh dissident and former banker Mukhtar Ablyazov was deported nighttime from Rome to Astana with her six years old daughter, under very unclear circumstances.

I also believe that the future will bring us sustainable progress, with the help of a “third industrial revolution”, as defined by people like the Noble Prize winner Carlo Rubbia.

The “Basilicata Case” though is an example of how the oil industry benefits only certain kinds of territories and only in certain ways. Basilicata is not a desert. It has a small population, but its area has been inhabited for a million years. It is impossible to even think about using 60% of the region’s land for extractive purposes. Civil society has a duty to protect its land.

In this video Francis Ford Coppola introduces you to Basilicata.