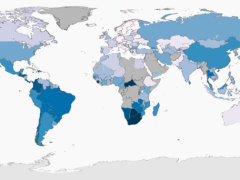 Europe likes to boast about its low level of inequality. But more important than this false vision is how Europe’s citizens are faring. To improve their living conditions, especially in the eastern part of the EU, we need to bake a bigger cake, not just divide the one we already have in a different way. And this can’t be done by fighting the economy.

Even the EU is not as equal as you may think

Look at the world map of income inequality as compiled from the so-called Gini index and you will see that in Europe everything looks bright. The social EU has equality while the wildly capitalistic USA or developing China are much more divided in terms of income equality.

The Gini-coefficient of national income distribution around the world, from Wikipedia

But think about it a bit more and you will realize that computing the European Gini index (i.e.: an economic measure of income inequality) as the mean average of EU members is nonsense. If there are small differences in, say, Germany and small differences in Slovakia, this does not mean that there aren’t large income differences between the nationals of different Member States. So if you compute the European Gini index more correctly than the CIA has done, to contrast between continents and regions,  you will get a picture of a European Union that has inequality comparable to that of the USA or China.

Big EU differences are not just the result of enlargement. In terms of changes in unemployment, the worst hit region is Southern Europe.

How equal is Slovakia?

When you look at the Gini index of Slovakia, it also seems that everything is OK. Slovakia is one of the most equal countries in the world, especially when you view it in terms of income after tax. But this is also because some  of our small group of people with really high incomes don’t register their businesses in Slovakia, but in  tax heavens, influencing the Gini coefficient of those countries upwards and saving Slovakia’s – at least on paper.

Is equality a really useful target?

However, low local inequality is not enough to satisfy the majority of Slovaks with low income, including about 14% of the unemployed who  rely only on social support. And surely it does not satisfy the middle class which pays for it.

Unfortunately, the recent government attempt to squeeze more from companies (mostly by taxes, but also by extra dividends from state-owned enterprises) brings us merely lower investment, more unemployment and higher burdens for the employed. With the present high unemployment rate, it makes no sense for entrepreneurs to spend more on wages.

To keep the present level of employment on a steady keel, the government has made firing of workers more expensive. In my opinion, this won’t help the workers of closed down companies and will have the adverse effect of decreased flexibility on the labour market – because businesses will now think twice before hiring new employees.

When the employment situation became too critical, the government came out with selective subsidies to support some jobs. Yet in reality this does nothing to promote more equal distribution throughout society.  Instead of creating an environment where it is worth while to employ more people in reasonable projects, the government just spends the taxpayer’s money on a  few party-friendly entrepreneurs.

While this approach could, under certain circumstances, lower inequality between low and middle income classes, if we want real improvement, we need high economic growth which lowers unemployment without lowering the real incomes of those now employed.

Of course growth brings high profit for some company owners, but in effect it also improves the living standards of workers.

“Inclusive growth” doesn’t mean aggressive redistribution of wealth and equalization. Sharing the “growth dividend” in a fairer way, as the OECD puts it, means lifting up the bottom billion, but not at the expense of growth per se. Too much equality often ends by worsening the conditions for many. In Slovakia we remember this well from Soviet times.