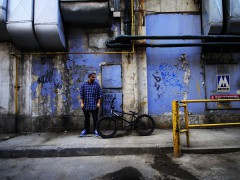 Like any other metropolitan city, Santiago, in Chile is also highly over populated. Traffic is such a serious issue in the valley of Santiago that the government has to regulate the number of vehicles on the road. The use of bicycles could be a perfect solution to control the traffic and pollution in this city which holds one third of the Chilean population, but the authorities are negligent and infrastructure like track ways, necessary for the use of bicycles, are in bad shape or missing in most of the roads. For bicycle enthusiasts like my brother (in the picture) and his friends; it is hard to find a place to ride their bicycles.