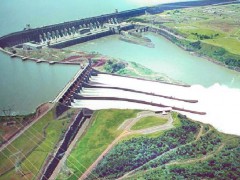 Marina Silva in 2008, as minister of the environment. Photo by Agência Brasil, Creative Commons 3.0

Meet Marina Silva. A former senator and minister of the environment for the ruling party, PT (the Brazilian Workers Party), in 2009 she left to joing the PV, Brazil’s small green party. Next year she finished third in the presidential race, with almost 20 million votes – an astonishing feat considering PV’s modest budget and limited time on the public-financed TV campaign. In 2011 she announced she was leaving the PV to launch a new party, Rede Sustentabilidade (Sustainability Net), or “Rede” for short. Although the party is still waiting for approval from the Electoral Court, Rede and Marina were one of the few clear winners to emerge from the wave of protests that have been sweeping Brazil since this June. Marina is seen by a significant slice of voters as a “third way”, a new alternative to both Dilma Rousseff’s reelection and the  PSDB (The Brazilian Social Democracy Party), the main opposition party which ruled the country from 1994 to 2002.

Marina’s economic advisors have been among the most prominent economists in Brazil to propose alternative approaches to development other than just focusing on GDP growth. In her 2010 presidential campaign, she was joined by José Eli da Veiga, a professor from University of São Paulo who, more than a decade ago, was already teaching Georgescu-Roegen and the physical limits to growth (I was one of his students at that time). Currently, she is reported to be working which such leading figures as André Lara Resende, one of the intellectual mentors of the wildly successful Plano Real (which eventually stabilized Brazil’s peak inflation in 1993) and who recently published a book called Os Limites do Possível (The Limits of Possible) which also stresses the importance of thinking about the limits imposed on economic growth by environmental factors.

Now we do not need to wait until Marina wins a presidential election (which still looks unlikely) to start wondering about what “the limits of the possible” mean in the case of Brazil.

They mean, first, going against the development path favored during the “miracle years” of military dictatorship when GDP growth might have been  impressive, but which was a time when inequality markedly rose in an already very unequal country, and large infrastructure projects were launched without the slightest concern for their environmental impact. The construction of the Itaipu dam, for instance, destroyed the Guaíra falls, then the world’s largest waterfall by volume. Delfim Netto, a powerful finance minister from that time, became famous for saying that “first we need to grow the cake, then distribute it”, and the dictatorship ended with a president who was said to prefer horses to people.

It took Brazil eight years of democratization to purge the excesses of the 1970s and 1980s and find a way to stability and some degree of sustainable growth. However, despite recent improvements, the country remains very unequal and still lags behind in many development indicators. Income inequality only started to fall recently, helped by a commodities windfall and ingenious transfer programs such as Bolsa Família, which pays monthly stipends to almost 14 million families at a cost of little more than 0.5% of the country’s GDP. And, even if distribution was perfect, Brazil is still not a rich country. Growth continues to be the main driver behind development (or at least a symptom of the same phenomena), and, in my opinion, it would be quite risky to force a deliberate transition to lower growth in countries such as Brazil.

That is not to say that there is no space for improvements in terms of sustainability and awareness about the planet. Improving urban public transportation would create incentives to people buy less cars and burn less fossile fuel. Removing fuel subsidies would send a strong message in the same direction. Pricing water more smartly would reduce waste. However, Brazil and other developing countries cannot simply give up growth and its traditional engines – investment in capital, urban migration, mechanization of agriculture, etc. The environmental laws and constraints set by contemporary standards are already much more restrictive than when most of the Western world became rich. And it is in rich countries where “the possible” already leads to high living standards and its “limits” should be more carefully examined.