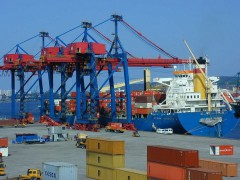 Port of Santos in southeast Brazil, the largest port in South America but only the 39th in the world. Photo by Claus Bunks on Flickr.

Free trade in Brazil has an inglorious past and an uncertain future. World Bank data shows that as of 2011the country lies at the very bottom of a ranking of merchandise trade (the sum of exports and imports) as a fraction of GDP: less than 20 percent of Brazil’s annual domestic output is traded with other countries. Although this is a characteristic shared with other very populous countries, with huge internal markets (the United States, Japan, and Pakistan also appear at the low-end of the ranking), some local features may help to explain why international trade is so relatively small in Brazil.

First, Brazil has some mercantilist roots that date back to its colonial past and were perpetuated through independence. External accounts have always been a source of worries for policymakers in Brazil (I had a boss who used to say, quite accurately, that Brazil’s economic history can be told through its myriad of foreign exchange crises), and in the twentieth century several theories tried to explain this in terms of dependency of commodities and late industrial capitalism. Those theories were in fact so influencial that they triggered a huge effort (based in the concept of “national developmentalism”) in imports substitution which created some important local industries but led to unintended consequences such as low produtivity, inferior goods and higher prices in some sectors.

During my childhood, in the late eighties and early nineties, people would use the word “imported” to qualify almost any desirable, high quality product from toys to wine and chocolate, since imports were generally much better than their local equivalents and also scarce (due to various tax barriers and some even more draconian controls – until the early nineties, for example, it was forbidden to import computer hardware to Brazil).

In 2003, with the beginning of the so-called “commodities supercycle”, Brazil started to generate robust external surplusses and could flirt with free trade. Imports boomed even more than exports, and, as result, in the space of a few years the country returned  to its usual position with a deficitary current account. The local currency gained value sharply and the domestic industry felt the double impact of deteriorating terms of trade and increasing international competition. Currently, with signals of a reserve in the commodities uptrend and a broad consensus (even among liberal economists) that something must be done to save local industry, free trade will probably be a casualty.

Against this background, it comes as no surprise that Mercosul (the free trade alliance with several other Latin American countries) is in a state of stagnation. Free trade also doesn’t seem to be a priority for the other Mercosul heavyweight, Argentina which is lost in the chaos of multiple exchange rates and price controls.

Unless the prices of primary products such as iron ore and soybeans resume the price rise of the past decade, Brazil will soon probably once more face the problem of external financing and continue to be quite closed. How to change this scenario is anyone’s guess, but, given the country’s history, policymakers will probably see free trade more as a problem than a solution to the chronic issues of low productivity and lack of competitivity.

* The title is a tribute to the great book by Geoff Dyer, which, of course, has nothing to do with free trade.