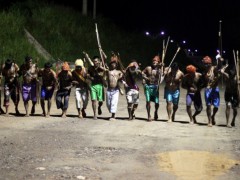 Graphic by the author.

Why do we need growth?

It’s impossible for the planet to cope with unlimited growth and yet we never stop wanting more: more production, more goods, more consumption. But do such trends actually benefit the whole population or we are just talking about a way capitalism has found to recreate itself?

Are we just talking about a lucky few people consuming all the natural resources while the rest of us, maybe 90% of the population, get none of the benefits, only the leftovers, the scraps.

We all know about the “economy of war” which means that we need constant warfare so we can rebuild war-devastated countries, fund the war industry and promote the arms trade (and make sick propaganda that forces other countries to buy weapons and invest in military technology  just to avoid becoming targets themselves). Istvan Meszaros called it “cancerous growth”, meaning that growth like cancer corrodes everything around it until a point of total destruction is reached. But in our case we mean the whole world.

Why don’t we produce only what we need? Why not try, for instance, to bring producers and consumers together to avoid waste? Why not invest in full recycling in order to avoid depletion of all our natural resources and, most important of all , why not put an end to the “obsolescence industry”?

Imagine what would it would be like, for instance, if everybody in India, Brazil and China had the same rate of consumption as the average North American does. And impossible to maintain economy and total breakdown, that’s what we’d have.  It’s in the elite’s own interest to keep most of the world’s population down under the poverty line because that’s the only way they can keep on consuming like they do. That’s the only way we can still hope that the environment won’t  “give up” on us.

Do we really need SUVs that come at the expense of the environment and our natural resources? Probably not. But lifestyles aren’t easily changed and  SUVs are just one of a million examples. Can’t we recycle more than just dried up oil, for instance? Sure we can, but it comes with a price tag.

I’m not talking about stopping investment in technology or defending going back in time. Quite the contrary. We must invest in clean technology, in ways to recycle all that we produce, in ways to stop wasting so much electricity and in ways of maintaining the few at the expense of the many.

Why cars (and SUVs) when we could find collective solutions to mobility? Or maybe less production of meat and other goods by knowing and changing people’s habits and by bringing consumers and producers closer together?

Capitalism works (theoretically) on the basis of supply and demand, but is this really the best method to do things? We don’t need one ton of food to make it cheaper if all we can consume is half a ton (but when producing half a ton increases prices). Why is better to waste half just to make prices more compatible with what people can pay?

I can’t stop thinking about this every time I go to a supermarket. All these wasted products while millions starve. But that’s capitalism for you. We must produce in bulk to reduce prices, but at the same time millions can’t even afford it and so … let’s just waste what people can’t buy.

And every year we must produce more and more, even if there isn’t more consumption or even if this consumption just comes from the same people consuming more (and wasting more. of course).

We live in a society of waste. We must grow, but if we can’t actually use or enjoy everything, we must pretend we can and waste it.

We make a confusion, an obvious confusion about growth/consumption and development. We rarely have the latter, but we think we do. Nature disagrees. But we don’t care.

One of the main projects of the current Brazilian government is the so-called Growth Acceleration Program (PAC) that consists of localized nationwide infrastructure interventions to create jobs and fill the gaps in the Brazilian infrastructure – ports, airports, roads, etc. PAC ambitions stretch from urbanizing favelas to the construction of the Belo Monte Dam.

This dam project was conceived as a way to create not only jobs for thousands of people but also to promote industrialization of Brazil’s northern territories, and supply the aluminum industries in the state of Pará with cheap energy. The rest of the energy will be used for the development of other industries and for public and private lighting.

The problems here are obvious and go way beyond the environmental impact of the dam itself. Repercussions of the dam project stretch as far as an increase in child prostitution and child abuse around the area of the site, notably in the town of Altamira, together with increases in the cost of living across the whole region.

Apart from  such obvious problems and social issues, we can also wonder about the reasons why such a dam is needed –  for development of the inefficient aluminum industry which involves huge expenditure of energy for a product of low added value.

Well, the government needs to pay for the “funding” it received during the last electoral campaigns and all that money invested in the Workers Party by industrialists. That’s for what.

What we need is to change our perspective of what’s important and of how we consume.

We must consume with conscience, bearing in mind that we must change our behavior patterns to include those whom we’ve left behind.