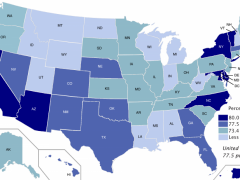 The US Gender Pay Gap state by state

The gender pay gap has long been an issue in the United States. It is often overshadowed by other gender-related issues and can drop into the political background as issues like abortion take center stage. It’s been 50 years since President John F. Kennedy signed the Equal Pay Act into law, calling it a great “first step” towards gender equality in the workplace. But what has changed since then? How far are we from mitigating the pay gap for women in America?

Let’s take a look at Texas, where I currently live. The average Texas woman earns just 80 cents for every dollar her male peer earns. This is up from 59 cents from 1963, but at this rate will women have to wait another 50 years to close the gap? Or another 10? The pay gap hasn’t budged in a decade. The American Associate of University Women (AAUW) reports that in 2012, as in 2002, among full-time, year-round workers, women were paid 77 percent of what men earned.

In July 2013, Senator Wendy Davis (D-TX) claimed that Texas women make an average of $8,355 less per year than their male counterparts doing the same job. Sen. Davis’ claim brings this issue to the fore at the state level in direct response to Governor Rick Perry’s June 2013 veto of legislation that would have altered current state law to mimic the 2009 Lilly Ledbetter Fair Pay Act, which made it easier for women to sue employers over pay discrimination. Legal recourse under this act does not exist in the state courts.

Senator Davis got this figure from a 2012 report from the National Partnership for Women and Families (NPWF), which drew on data from the 2010 U.S. Census Bureau indicating that Texas women made 79.1 cents for every dollar paid to men, placing Texas ahead of 37 other states.

In certain cases, the pay gap exceeded the $8,355 cited by Davis, while in others it was considerably less. To fully understand the gender pay gap in the US, we must take a nuanced look at different sectors of employment and a subset of job-specific variables.  Did the study compare the same jobs? The same salary levels? Was the sample size large enough to consider the fact that there might be fewer women employees in the jobs with the largest difference in earnings and a greater number of women employed in the jobs with the smallest difference? A closer look at the NPWF study clearly shows that it failed to provide controlling for a number of important variables, including years of experience, education, company size, management responsibilities, and skills.

In 2013, Payscale conducted a national study of the median pay of men and women for 150 occupations. By giving controlling for the variables mentioned above, the survey’s results show a $2,000 pay gap in Texas between median pay for men and women in similar jobs. This is significantly lower than the NPWF estimate, which shows the difficulty of accurately estimating the pay gap.

The estimated 20 cents pay gap ranks Texas 18th out of 51 in pay equality. The District of Columbia has the smallest gap at 9.6 cents, while Wyoming has the worst at 33.4 (the national average is 23 cents). This phenomenon is not limited to the U.S. – in every industry and every country in the world, women continue to be paid less than men for the same work. However, entrenched socio-economic factors persist and must be considered qualitatively for a comprehensive analysis of gender pay equity. Perhaps progress in this regard simply requires the ever-present variables of time and awareness.

Or, perhaps bridging the gap is based on performance; the chance and space to succeed. At the executive level, we are witnessing a generational shift as many baby boomers are retiring. And as companies become more meritocratic with promotions, older staff with years of experience are no longer guaranteed advancement as digital skills become more important, allowing younger employees to advance faster.

This leads to the question: could more women, earning more in executive and leadership positions effectively bridge the pay gap over time? Or at the very least be in a position of advocacy for public opinion? While it may be too early to tell (not to mention issue of the small sample size) a recent study of graduates from the University of Texas McCombs School of Business shows promising developments.

Women from the MBA Class of 2012 are closing the gender pay gap, earning larger salaries on average than the men from their class. The average post-graduate base salary for class of 2012 women is $106,073, compared to $104,631 for men from the same class. In 2011 there was still a $2,500 wage gap in base pay for women. More women are heading to business school rather than attempting to move up the ladder at their current jobs or change careers, which takes more time and yields less in the long run. Stacy Rudnick, Director of Career Management at McCombs said, “Business schools may offer an unprecedented opportunity to level the playing field for women. They’re a place where women can more easily be recognized and recruited by organizations based on their skill sets and contributions as future leaders.”

More education is an effective tool for increasing earnings, but some say it is not as effective when it comes to reducing the gender pay gap. Surveys still show that at all levels of academic achievement women’s median earnings are less than men’s, and in some cases that the gap is larger at higher levels of education.  A recent AAUW study found that among full-time workers one year after college graduation, women were paid just 82 percent of what their male counterparts earned.  What the McCombs study does show, however, is that those with the right education and skills have a chance to bridge the gap at the executive level microcosm. Perhaps promising developments like this are a sign of progress?

For the greater female population (those not in an elite business school), it’s important to ask yourself: would I be satisfied with giving away 20 percent of my salary?

Statistical nuance aside, there are still very real gender stereotypes that factor into survey design, affecting data and analysis. Surveys provide a schema for dialogue on pay equity but the qualitative factors involved in such a complex issue often overshadow the hard data. Recently two factors were addressed: time and awareness, with the latter as the main catalyst for change. Getting involved and educating yourself is the first step. Check out some of the key facts at AAUW, in particular the Face of Pay Equity to see how the gap affects you, and how you can put this research into action.