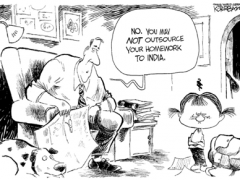 With swelling  youth unemployment in the EU, young people in Central European youth are facing some difficult, yet not so obvious, choices. In an unequal world, where competition for jobs has become global, reaching for Western European living standards might just not be a sustainable long-term solution.

With the spectacular economic development seen in East Asian countries , young European adults are facing multidimensional competition on the job market. They not only have to compete with the older generation that has more work experience, but also with both the young and old from Asia. People from the developing world are happy to do the work that employees in Western Europe and in the USA do, but for a fraction of the wages Westerners would find acceptable.  More and more people are leaving Central Europe to try their luck in Western Europe, but not only have people become more mobile –  jobs can move across borders at incredible speeds as well.

More and more jobs are relocating from Western Europe to Central Europe or even further afield to South-East Asia. The well-known trend of outsourcing has led to the mushrooming of shared service centres in both Central Europe and South-East Asia. For instance, accountants and HR assistants used to vital to economies like France, Spain or Germany. But not anymore. Nowadays, a multinational HR firm can handle the HR issues of French employees from Budapest, thus cutting costs significantly. The tricky thing about globalization is that as long as we have such inequalities not just on a global scale but a regional one as well, people striking for higher wages in Western Europe will merely exacerbate the shifting of jobs to countries with lower average wages. In other words, the race to the bottom is unfolding before our eyes.

Central Europe is somehow caught up between India and the Philippines on the one hand, and Western Europe and USA on the other. Various international companies have opened offices in Budapest that are not vital for the core business activity of these firms. Over the past years we have seen numerous examples of Budapest being used as a springboard for job relocation to India. Some companies use my country as a testing  ground: if business works here, it can work in India, too. Accordingly, after a couple of years of operations in Budapest, a lot of jobs pack up and move on to emerging South East Asian economic hubs.

What does this mean to well-off countries in the West? The borderless global economy is truly a Western project. It seems to me that this very same project is now turning against its creators. Competing companies will have to keep costs low. At the end of the day, a  CEO is not accountable to the Ministry of Employment, but to the shareholders. The big question is whether shareholders are truly worried that moving so many jobs to other countries can have the negative effect of shrinking consumption of their own products. My answer would be no.

For the moment, Central Europe seems to be riding the wave of this relocation trend. But as salaries inevitably get higher, there is a real danger that these migrating jobs will move on ever further East. As long as there are several million college graduates in India willing to work for a fraction of the rates in Europe, young people in Central Europe face a tough choice: either we carry on striving for a Western European living standard and thus risk losing our jobs, or we rein in our ambitions for the sake of long-term job security.