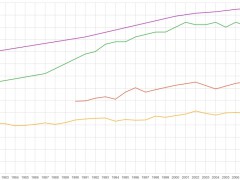 Child obesity in the United Kingdom

As Britain celebrates its successful hosting and performance in the Olympic Games, youth inactivity and obesity is a growing and under-addressed issue. The growth of child obesity rates is such that if they continue Britain will have largely obese population by 2050.

According to the World Health Organization (WHO), the United Kingdom’s population is one of the most affected by non-communicable diseases. This is strongly affected by negative dietary and exercise habits. The proportion of people considered “physically inactive” reaches 66.5%, the overweight 64.2%, the obese 26.9% and those with raised cholesterol 65.6%. Obesity contributes to the development of heart disease, diabetes, certain types of cancers and other diseases.

A good start in addressing health issues is prevention through the spread of awareness and good habits as early as childhood. However, as we’ve seen, the bulk of adult British society is then at odds with the type of healthy role models suitable for children and youth. According to the Government Office for Science, about 10% of children in England are obese, with a further 20–25% of children overweight. The National Health Service warns that if we continue like that by 2050 about 90% of children will be overweight or obese. This means that with increasing obesity rates there are going to be increasing number of young people entering adulthood with related illnesses.

The likelihood of being overweight or obese is partly determined by genetic factors, however unhealthy nutritional patterns also play a major role. Research by the University of Leeds has found that 82% of school lunchboxes made by parents contained foods high in saturated fat, salt and sugar, with items chosen by parents including crisps, sweets and biscuits. Although schools must have a policy on packed lunches, there are no national standards supported by the legislation.

Although UK is world’s sixth largest economy in the world it is actually facing growing socioeconomic differences and increased poverty. There are 3.6 million children living in poverty in the UK today, over one in four. This is above the OECD average and puts United Kingdom behind the Scandinavian countries, much of continental Western Europe and some post-communist countries such as the Czech Republic and Slovakia. Lower income parents may lack knowledge or income to purchase healthy organic products for their children. Socioeconomic inequality is likely to increase as the United Kingdom has implemented tax cuts for the wealthy, a virtual tripling of university of tuition fees, and growing austerity measures and unemployment in the face of the economic crisis. The economic situation puts the most vulnerable to risks which are going to have a major impact on their lives.

Children of the West Midlands children are among the most overweight in England. Dr. Neil Thomas of the Southampton University Hospitals Trust says that 34% of boys are either overweight or obese and 30.6% of girls; and in some Birmingham districts, up to 50% of 11 year olds are overweight or obese. Some of these children already have diabetes, hypertension, fatty livers, depression, and early markers for future heart disease. In fact this may be the first generation in history where children will die younger than their parents.

There has been very little recent development in the area. Just two months ago the House of Lords discussed the need for schools to address food standards but this has yet to lead to concrete action. NHS Birmingham did not relaunch their campaign from 2010 which could increase awareness in the areas most needed for it. The biggest highlight seemed to be when Jamie Oliver, a celebrity chef who has campaigned for healthy eating, carried the Olympic Flame to Newport, Essex. However is that enough to change the trend?

Maybe the biggest challenge is not finding funding in times of austerity for more canteens or promoting local agriculture, but changing unhealthy habits revolving around fish-and-chip food culture.  Britain missed its chance to confront the national problem with the London Olympic Games. The nation seemed to be more interested in how many gold medals Team GB would win rather whether British children will win a ticket to healthy childhoods.

Keeping children well and healthy should not be a privilege for the few. It is an obligation of every parent and every country. It is a future generation we are speaking about.