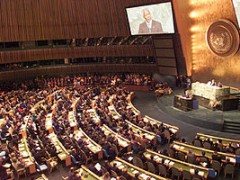 At the Millennium Summit convened by the United Nations from 6-8 September 2000, the then Secretary-General Kofi Annan presented a report that laid the foundations for the pursuit of the Millennium Development Goals. Entitled ‘We the Peoples: The Role of the United Nations in the Twenty-First Century’ , the report was aimed at re-orienting global governance in the light of the rapid globalization of the world.

The Summit provided a framework to help countries reduce global poverty by aiming to improve social and economic conditions in the world’s poorest countries by the year 2015. The Millennium Summit and the ensuing United Nations Millennium Declaration engaged all of the UN’s 193 member countries and an additional 1000 civil society groups from more than 100 countries in one of the biggest global action plans since the meetings that established the United Nations itself in 1948.

On its website, the Bertelsmann Stiftung says that the 2011 Salzburg Trilogue is based on the assumption that ‘Any effort to bring about real change in our global economic, financial and social order will be doomed to failure unless we succeed in clarifying, in universal terms, the goals and social norms that can guide global development and help to resolve conflicts between the interests of individuals, society and the environment.’

The world is at a time when problems of climate change, economic recession, job cuts and terrorist attacks affect rich and poor, big and small countries alike. The terror attacks in Norway and the bombing of the UN offices in Nigeria all prove that no country is exempt from the effects of globalisation. In fact, the problems of the world have become more universal now than they have ever been. It’s looking increasingly clear that the best way to mitigate social drawbacks is to harmonize and set down norms that will regulate and hold all countries accountable. The best way to do this is to transcend political biases and differences. And the best people to champion this course are the people of civil society.

The Horn of Africa is now undergoing the most intense famine and drought in six decades that has displaced close to 12 million people and put them at severe risk of malnutrition and hunger. Many have already died. The world could have done better at stopping this aggravated crisis if concerted efforts had been made from the very beginning, despite stifling of humanitarian access to the region by the radical Al Shabaab group. The world could have assumed more responsibility for the region than it has done – after all, the world has more than enough food to cater for the extra mouths in the Horn region.

In the forefront of the collective struggles to better the lot of humanity, civil society groups have positioned themselves as forms of alternative government for large communities. In many places , such as Somalia which has lacked a functioning government for close to two decades, it is the works of NGOs like ActionAid, Doctors without Borders, World Vision, Catholic Relief Services (CRS) and the Adventist Development and Relief Agency (ADRA) that provide clean drinking water and medical care for thousands of people. This is a point where leadership is being provided from across the world to solve local problems. In civil society groups the world can transcend differences and push for our common humanity since these groups represent ideologies rather than vested political interests.

The United Nations declared that the world’s population will reach the 7 billion mark in October 2011, and with so much sheer diversity we can only create a potent force to help solve our common human problems if we remove barriers of class and politics, isms and philosophies. With a record world population of 7 billion, our present generation faces an even greater responsibility to ensure that sustainable action is put in place in economic, political and environmental terms to leave the world healthier on all fronts.

The UN’s Millennium Development Goals are an on-going attempt to harmonise all this action. However, it may be more desirable to leave leadership in the hands of civil society groups which in turn engage people on the ground. These civil society groups ought to continuously engage with each other to forward the cause of The Greater WE – a return to the fundamentals of equity and equality by all and for all.