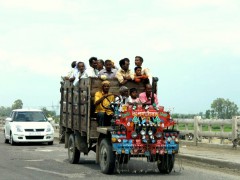 Alan Greenspan is responsible for the 30% pay cut I had to take with my first job in 2009. Well, there are many dots that need connecting  between Mr. Greenspan and my first company’s decision to slash my salary even before I joined, but he owes an apology to most of those dots too.

With the news of my pay cut, I learnt my second lesson from the corporate world – the importance of being aware and nimble footed with happenings around the world. (The first lesson was the importance of insisting on written contracts. :)) But the realization of how intertwined our lives are with global currents felt more like a slap in the face than a shake of the hand. If Adam Smith was around now, he would have added tentacles to his invisible hand metaphor. The tentacles of economies and cultures are spread across the world and are becoming symbiotically entrenched. The ensuing (huge multiplayer) tug of war is shaping and reshaping the world in ways that we cannot completely comprehend.

Globalization is a very new phenomenon – something that we barely understand and no longer can control. And yet, it’s the language of control that dominates its discourse – ‘containment of the Eurocrisis’, ‘curtailment of visas for immigrants’ and so on.

2 Indias: When will the non-metro India overtake the metro India? Photo by: Ajinkya Pawar(CC-BY-NC-SA 3.0)

Currently, the Indian parliament has ground to a standstill with heated debates (that usually go nowhere) about allowing FDI (Foreign Direct Investment) into the Indian retail industry. It’s a contentious issue because it affects around 20 million small retailers who form the backbone of the Indian unorganized economy, the millions of farmers and the large middle class that will consume from the Walmarts & Carrefours of the world. Earlier this year, Hillary Clinton visited Delhi and made a strong case for allowing FDI in Indian retail. The lobbying machinery has been working overtime to convince Indians that the ‘reforms’ will usher in a more efficient market, create supply chain infrastructure and provide higher margins for the farmers. However, the global experience is not exactly a cause for optimism – as it shows that the margins of producers have fallen while monopolies have obliterated the cultural fabric, marginalized the majority of entrepreneurs and brought in an underpaid workforce of salesmen.

Though India is a large and varied country, the global players across industries are always only interested in the top metropolitan towns. So essentially globalization is contributing to unsustainable urban congestion and not contributing anything to the welfare of the nation at large. More importantly, it’s driving the East to adopt Western migratory patterns that are skewing demographics in an unsightly manner.

The narrative of globalization often is predicated on adaptability of labor – the skilling and up-grading of labor. But is this really true? Is it even desirable?

Globalization facilitates efficiencies of scale. And the scale flattens out differences, cultural idiosyncrasies and independence of consumer choices. (Frito Lays bought out the Indian snack brand – Uncle Chipps and then subsequently tried  to replace it with ‘Lays’. Though the market muscle ensured Lays’ leadership, the unique consumer connect that Uncle Chipps enjoyed, ensured its revival in some markets.)

And yet, for all its dangers and promises, globalization has enabled the creation of some amazing enabling tools. The real question is how can these tools be employed gainfully for the majority of Indians. Trickle-down theory has not worked for our country. A direct solution must exist. Hope rests with the ICT4D (Information Communication Technology for Development) efforts now been undertaken by many enthusiasts, organisations and governments, and the open movement that is making knowledge more accessible.