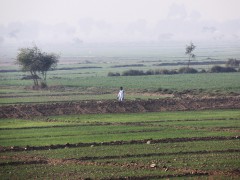 Sindh government initiated a first-of-its-kind pilot project in 2008 to distribute 91,000 hectares of cultivable state land to thousands of poor and landless peasants, with specific focus on women. The Province of Sindh has traditionally been a patriarchal society mainly sustained by agriculture. While women have always played a vital role in the province’s agricultural development, only a few women actually own the land they work on.

That, however, is not only true for women. Cultivatable land is largely owned by a few affluent people who then hire peasants to work on the crops. Peasant families live on landlords’ lands; they get their share of food and a meagre income, if any. 64 percent of Pakistan’s rural land is owned by only 17 percent of households according to a government statistics. Specifically, Sindh suffers more acute land issues with just 0.4 percent of households accounting for nearly 24 percent of land. This shows how the land is concentrated in the hands of a very few.

The project was initiated during the previous democratically elected government and while it did face its fair share of impediments, many women have taken advantage of this project. Since 2008, the government has distributed lands among 6,000 landless women in 17 districts of Sindh under the scheme’s two phases. While the land distribution project is still in its formative years, it has some salient features which, if implemented well, can begin the process of changing the socio- economic situation of rural Sindh.

Shirkat Gah, a not-for-profit women’s resource center working for women empowerment and social justice, has convened an extensive study trying to analyze the effects of Sindh government’s land distribution project on women. The paper studies the nitty-gritty of the scheme, problems faced by applicants, work of revenue officers, and more importantly the effect of being a land owner on successful women.

“One woman reported that getting land under this scheme has proven to be counterproductive because it has given rise to expenses related to the development and cultivation of land that she is unable to meet” – report.

There are a plethora of problems with the current features of this scheme. Women who receive the cultivable land are also given a support package of PKR 58,000 in two installments which definitely is not enough to bear the expenses of farming. Apart from the financial aspect, women have largely reported having faced reduced amount of domestic violence and an alleviated status.

It should be noted here that even the propertied classes often manipulate their women out of the inheritance and are forced to forfeit their share for brothers or sons. While Pakistan’s state law and Shariah law (based on principles of Islam) enable a woman to have half of the share of what her brother would have from a parent’s property (with many other clauses), not many actually get the inheritance. According to local customs, women receive high amounts of dowry in the form of electronics, gold, furniture and what not; often women are told that this is all their parents could give them.

This should be seen under precept of why women in Pakistan stay silent when they face domestic abuse or marriage issues. Locally women are viewed as dependents and their invisibility in education or labor force is deeply rooted in customary practices and a lack of sensitivity of policy makers. While owning land doesn’t necessarily empower a woman, it definitely settles many of her worries and reduces her dependency on a male figure in a patriarchal society.

Pakistani government since country’s inception has tried to sort these land issues for quite a few times in history. However, those efforts almost always allotted land in the name of the male household head making this the first time that focus has been on landless women. If the process could get more transparent with less amount of power given in the hands of revenue officers and a proper marketing strategy with an aim to directly reach the women of rural Sindh, the initiative has the potential to gear start a socio-economic change in the region. Being able to own cultivable lands will not only empower women economically, but will also help alleviate women status and visibility in the region.