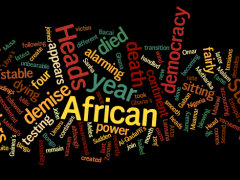 The death of Ghana’s President John Evans Atta Mills some weeks back presented a different test of how much Ghana’s democracy has matured. This West African nation ushered in democracy in 1992 and has since successfully held elections every four years. The way elections are conducted and the political transition that ensues have become the predominant measure of democratic maturity.

Typically we get good grades from international observers eager to find a good story if in the aftermath of the elections there is no widespread violence and a winner is declared.

This time though and especially in an election year, President Mills’ death had the potential of creating uncertainty and perhaps a vacuum. The constitution’s clear directive regarding what should happen in the event of a President’s death ensured that within hours a new president (his vice) was sworn in. Thus any possibility of confusion was squelched in such a swift manner that seems unimaginable now.

The way we came together as a nation to mourn, while satisfying the requirements of our constitution was admirable and will go a long way in strengthening our democracy. The positive perceptions of Ghana as a thriving democracy were in many ways re emphasized by the presence of dignitaries like President Yayi Boni of Benin, President Alassane Ouattara of Cote d’Ivoire and the US Secretary of State Hillary Clinton among others at the funeral of President Mills. During this period as the World focused on Ghana as we grieved, many in the international community acknowledged Ghana as a country on the cusp of economic properity largely on account of a stable democracy.

Sadly, the death of Ghana’s president was not the first of a democratically elected African leader this year. Bingu Wa Mutharika of Malawi died in April while Ethiopian Prime Minister Meles Zenawi’s death occurred a little over a week after President Mills’ burial. Each of these countries had processes for political transition handover unique to them but similar in other ways. Encouragingly though, they all were guided by a constitution that established their democratic credentials. But perhaps one can quibble that the time it took to install a successor to the deceased presidents in each of these countries is an indication that consolidating democratic gains go way beyond the holding of elections.

In any case, it is instructive that in all three cases the countries achieved the same thing: law and order was preserved and democracy was entrenched.

Naturally, there were different dynamics at play in each country but the outcomes emphasized one common thread, that is, the continued push for democratic rule across the continent.

Contrast that with a couple of decades ago when leaders in similar situations pre-anointed their successors, invariably a clansman or a loyal associate, as head of state, as though the country was their personal fiefdom.

There are still examples in recent times of this phenomenon – recall Togo and Gabon. But the agitations in Senegal during that country’s recent elections and the ditching of the incumbent octogenarian President confirm that in a democracy the power indeed lies with the people. Abdoulaye Wade’s attempt at subverting democracy was thwarted by disaffected Senegalese who coalesced to form a formidable opposition. Instead of Western intervention there was local agitation and determination to ensure that the former president did not have his way in what many suspected would ultimately lead to his son succeeding him.  Unfortunately for Mr. Wade, like many people across the continent, the Senegalese voted for a democracy that offered a real choice in leadership.

We seem to be getting some of the processes right as we entrench democratic principles and practices in our daily lives. Perhaps the remaining question is how to make this system of government work in improving the lives of our people. There is no sense in voting every so often if the leaders we vote into office maintain the status quo, neglecting the very real needs of people.

How do we transform our voting, parliamentary work and government business into improvements in the lives of ordinary people? How can we harness the relative stability that democracy brings and utilize our resources to provide basic amenities for our citizens?

All these are open questions but ones that have to be adequately answered if democracy is not to end up as a passing theme in Africa’s quest for prosperity and increased relevance in the World.