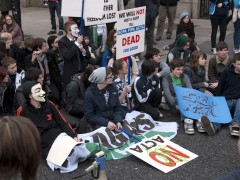 A Dublin protest against ACTA. Source: Sebastian Dooris on Flickr.

In January 2012, Google, Wikipedia and Flickr temporarily closed their websites in protest of two proposed U.S. Congressional bills: the Stop Online Piracy Act (SOPA) and the PROTECT IP Act (PIPA). The legislation, if enacted, would have undermined online freedom of speech, and would have allowed governments and corporations to shut down websites critical of them – all in the name of “copyright protection,” a vacuous term intended to confuse the public about the bills’ true meaning.

SOPA and PIPA were soundly defeated, but freedom of speech is still under threat. Realizing that such legislation would never be passed democratically, politicians have instead resorted to trade agreements. Thus the European Union and the OECD signed the Anti-Counterfeiting Trade Agreement (ACTA) in October 2011. The agreement resembles SOPA and PIPA in its disregard for fundamental human rights, with one important difference: ACTA negotiations have been shrouded in secrecy.

What we know about the agreement comes largely from Wikileaks documents. If ratified, ACTA would allow governments to search personal computers and monitor online activity without a warrant. Aaron Shaw, a Harvard University Research Fellow, claims that ACTA would make Internet Service Providers liable for their clients’ actions, forcing them to comply with privacy invasions and site shutdowns. This would lead to a massive restructuring of the internet as we know it.

Bills like ACTA, SOPA and PIPA are not surprising, for powerful organizations often seek to suppress dissenting views. Media scholar Edward Herman carefully documented the history of U.S. print and TV media, and found that what once started as a free market for ideas and opinions was reduced to a concentrated industry controlled by a few conglomerates with ties to government. MSNBC, for instance, is owned by General Electric, which sells weapons to the Pentagon. This prevents MSNBC from effectively criticizing U.S. military action, hence stifling The First Amendment.

Yet it is not inevitable. ACTA has yet to be ratified and until it is, the burden falls on civil society to prevent its enactment. Organizations like Consumers International, EDRi, and the Free Software Foundation have already expressed outrage, but more action is required. Peaceful demonstrations, like those in Poland, have already had an effect; Poland’s Prime Minister Donald Tusk recently abandoned his support for the legislation.

When democratic governments fail us, as they often do, civil society must pick up the slack. Being an active citizen does not merely mean paying taxes and voting every once-in-a-while, but also petitioning, protesting, and using direct action to make one’s demands heard. If ACTA were passed, it would severely limit our ability to be free and active citizens. It is therefore crucial that we prevent its passage, and remain ever vigilant about our fundamental human rights.

Cornelius Christian is a writer for the Oxonian Globalist and a member of Global21, a student network of international affairs magazines and a partner of FutureChallenges.