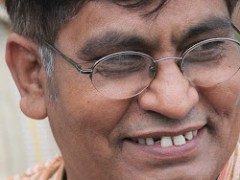 So sang Abba a few decades back. Sadly, hope, trust, love and faith are all in short supply. Well, so are jobs, employment and a good life.

The irony is that a reverse migration is happening. People from the West are flocking to the developing countries looking for work, opportunities and jobs while the emigrant population too is heading home to set up businesses or discover new ventures. The Indian capital, Delhi is no exception – it currently has a lot happening on the employment front.

Future Challenges sets out to find out about work and livelihood opportunities from three amazingly different types of people — a young Tibetan activist, a Dalit leader and a British photographer—all radically different and distinct types.

“For a Dalit, finding a job in Delhi is not easy. The government has closed recruitment for Class 3 and 4, the lowest rung of employees, where Dalits were usually employed. Such jobs have now been outsourced. We have no idea now of how many Dalits are getting employment because of outsourcing. The government’s policy has had a very drastic and damaging effect on Dalits.

Regarding the private sector, they are clear about being motivated by profit so they want to take people only on merit, and they also believe that the lower castes are not meritorious. The private sector has no transparent system of recruitment: they recruit people with the help of other private organisations and through the internet. What’s more, they employ only those who can speak English. Faced with such hurdles to jump, the bottom of the pyramid people never have a hope of entering the private sector in India.”

Lobsang-Dorji, a member of the Tibetan Youth Congress, lights a candle at a protest march. Author: Rahul Kumar (CC- BY-NC-SA 3.0)

“It was in 1959 that the Tibetans came to India. They did not bring any wealth with them and they were not educated. It did not matter even if they were the royals because they had brought nothing with them. They started by road-building in the Himalayas or  selling woollens, some started farming in south India, others opened up small restaurants and yet others found work in factories. Initially, all the Tibetan exiles started off with small scale work. Many found employment with the Tibetan government in exile and their children were put in a boarding school. Once these children got an education, many of them joined the Tibetan government in exile which was continuously expanding. Over a period of time, the small businessmen became big and those working in factories found the confidence to establish their own line of work. But not everyone was successful.

During the last five years, there has been considerable progress. There are lots of well educated Tibetans — doctors, nurses, designers, models and even chefs. We don’t find government jobs, but we are doing well in the private sector and in our own businesses. There are HR people, tattoo artists, web designers, travel operators and many IT professionals. Many young people work in hotels and spas. Many girls have gone into modeling and many are working as beauticians.

But there is also unemployment amongst the young Tibetans. It is not easy to live in Delhi which is very expensive. Many Tibetans who cannot manage here often go back to smaller places in India. Still others are able to arrange for food and clothing but often are unable to save.”

“Originally I came to India without any specific plan along with my partner. However, finding work in India was almost accidental, a chance encounter with the director of an educational institute in Bombay led me to provide a series of lectures.  However in hindsight, this is how you find work opportunities in India. It is all about networking and being introduced to the right people. I have not experienced the value of this in any other country to the same degree.

After leaving Bombay for Calcutta we struggled to find work. Bengal is an extraordinary place, but Calcutta is stuck in a different era and is no longer a city with an international viewpoint – or so it seemed to us. We, therefore, decided to head to Delhi.

Delhi provided a good environment in which to meet people and rapidly build a network. However opportunities don’t come very often from within India and there were long periods where I was without work, particularly in 2011. Most of my work, both in journalism and in education/training actually came from European companies.

I have had teaching work with Indian colleges and organisations but this has been a negative experience. The students are often great, but management is badly organised. Salaries too are shockingly low and the facilities are poor. I also found that at some of the elite establishments there were professors, managers, directors with highly inflated egos to whom we were expected to display a degree of reverence. This is one of the things I dislike most about India.

Because of Delhi’s tight network of journalists, media people, writers, creative types, you have a lot of access to stimulating company, events and organisations. Work opportunities don’t necessarily follow, but it feels as though there is the potential for things to happen, to collaborate and be forward thinking and entrepreneurial.”