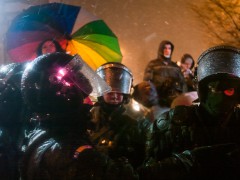 DOs and DON’Ts. We become familiar with their meaning in childhood. “Do this”, “don’t do that”. It’s a world made up of permitted and forbidden things and it’s usually others that impose the rules on us. If this is so, where is our free will? And if this is what democracy looks like, then we might well ask: are we really our own rulers?

When we think of democracy, those of us who live in democratic societies lay back relaxed with a snug smile on our faces. “Yeah, I’m cool, it’s pretty free around here”, we seem to say as we pity the unfortunate fools that had the bad luck to be born in some dictatorial part of the world. “Must be karma. Payback time, dude”, we think as we grab another bite of our capitalistic McDonald’s double cheeseburger washed down with a cold bottle of diat Coke of course, satisfied that our rights are being respected.

But, hey, wait! Us too, the so-called free ones, have leaders that know what’s best for us. Sure, we  elect them by casting a ballot and by so doing we entrust them with our will as part of the democratic decision-making process. But in the end, how can we tell they keep us in mind when they’re in the middle of some important decision?

Immanuel Kant, the 18th century German philosopher, said that when it comes to democracy law and freedom without force cannot be possible. He argues that if force is not included, then the law is just an “empty recommendation”. When not under coercion, people won’t do the right things, but will surely do the wrong ones. At least this is what Kant seemed to think.

States nowadays have a lot to do with force. It happened all over the world last year and it happened in Romania at the beginning of 2012. It was mid January when Romanians protested against an upcoming health bill and for a new president and prime minister. The new legislation stated that the emergency medical system should be liberalized, but doctor Raed Arafat-  the man who created the present emergency care system – said it was fine just as it was. He was against the proposal and eventually quit his job as a state secretary in the Ministry of Health. The protests started in Târgu Mureş and quickly spread to over 51 towns and cities in Romania. Even if we’re a democratic country, freedom of expression only went as far as the state allowed it. As soon as the chants became unpleasant or the movement turned too virulent, the police unleashed their full might. We’re told we’re free, but the degree of our freedom is matter for supervision.

Whether anarchy, in the sense of a stateless society, is possible, I don’t know. I’m also not sure if  democracy without force would survive if it was ever conceived like that. But as the years go by, it seems to me that there is an ever deepening gap between citizens and their governments and not a relationship of cooperation. Do we need a certain political system, even if that system is democracy, to get a certain feeling like self esteem, joy of life or freedom? I don’t think so.

When it comes to the space our inner selves move in, is there truly anyone whose permission we need to ask on how far I can go with my state of heart and mind?