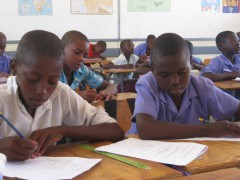 Children in a classrom during lessons.

The educational system in Africa used to be the envy of the western world, but what has changed? Why is education so expensive these days when it should be free?

At one stage I read about the University of Sierra Leone (Fourah Bay College) not being able to provide the paper for students to write their exams on – this was a shocker and eye-opener for me! I was overwhelmed by this news, thinking “Is there an education minister somewhere within the four walls of Sierra Leone? Because definitely someone is not doing their job.”

On the other hand, the condition of the South African educational system – especially when it comes to the black child – is “far better compared to other African countries”, but needs be improved rapidly and can be remedied in the sense of ongoing public debate and progressive dialog to improve the system as opposed to Sierra Leone and other African countries where there’s not even a discourse and where I haven’t seen any government policy or sense of urgency about tackling the poor standard of education.

Good education in Africa presently seems impossible if you are poor; it’s so expensive that it is only available to those that can afford it. The poor are left marginalized with substandard government schools – The Eastern Cape in South Africa comes to mind.

After looking at the trend across Africa, and most especially in Sierra Leone where I have taken a critical look at the present system, I believe that the insistence on education based on meritocracy (students advance purely on merit) should be encourage as this will lead to equity. To make this work, the education system needs to be insulated from politics and this is one of the major problems of education in Africa.

The influence of politicians in formulating policies about education without consulting educators and bureaucrats’ does not help in tackling the issues education is facing. As Tharman Shanmugaratnam (Finance Minister and former Education Minister of Singapore) once said, “the role of political leaders is to keep politics out of education.”

For example, in Singapore universities charge full fees, and give scholarships to low-income students.  The government encourages private donations to universities, matching them one-for-one.

How many African universities can overcome the political resistance to charging fees? Singapore has also done well with teacher training because it has been linked with pay-for-performance for teachers. Without the latter (which if often resisted by teachers’ unions across Africa), it is difficult to get results and accountability from the former.

Few parents can look forward with much glee to an evening spent poring over the accounts of their child’s school at the monthly Parent Teacher Association meeting. Even fewer have the financial expertise to know what fiddled figures look like, or the courage to challenge the head teacher’s excuses for why there are no textbooks. But maybe it’s time Africa’s parents stood up and challenged the endemic corruption across their children’s educational system.

The average fee was $4.16 per child per year in the seven countries surveyed (Ghana, Madagascar, Morocco, Niger, Senegal, Sierra Leone and Uganda) – all of which promise free primary education. Parents are also forking out extra money for textbooks, private tutors and exams.

Laws making primary schooling free have brought some of the most sweeping changes to Africa’s education systems. In 1999, the net primary enrolment ratio in Sub-Saharan Africa was 56% according to UNESCO. By 2007 the ratio was 73% and there were 12.8m fewer children out of school. (AEW)

But why are some parents still paying when education should be free? In some places, particularly in rural areas, schools receive such sporadic and minimal funding from the local and district authorities that parents have clubbed together and reinstated registration fees – as a way of simply providing some resources for their children’s classrooms and money to pay teachers.

This is despite an ongoing policy shift in Africa to decentralise education, handing over power to local and district authorities and communities. But the new crop of School Management Committees (SMC) and Parent Teacher Associations are often seen as opaque –  rather than transparent – institutions. Sometimes the most literate members of the community run these committees – perhaps former parents whose children are not at school anymore but who have remained good friends with the teachers. They don’t always have the best interests of the current students at heart.

Doubts also linger about the ability of even the more efficient SMCs to oversee the complex budgetary requirements of a school and help get more money into the classrooms. “Even those SMCs that seem to be meeting more often and being more active are still as likely as other schools to face demands for registration fees, “admits Stassen.

These findings chime with new research from the World Bank, whose 2010 Africa Development Indicators highlight the ‘quiet corruption’ seeping through daily life on the continent’.

Research in 2004 found 20% of primary school teachers in rural western Kenya could not be found during school hours. Such teacher absenteeism, low levels of teacher effort and the leakage of resources coalesce to leave a system where children leave school (often earlier than they should), without the skills they need to work as adults. This corruption is as “equally insidious” as the multi-million-dollar front-page scandals, says the World Bank.

In the short term it affects school results: a 2007 study in Zambia found that if a teacher is absent for one day a month, it reduces tests scores in maths and English by 4-8%. In the long term, it destroys parents’ expectations of what school can offer their children. They then decide to keep their children at home to work, rather than spend time in a classroom with no teacher. In a rebuke to the self-interest of trade unions, the World Bank’s report suggests that ‘teacher power’ – the significant leverage wielded by former teachers and teachers unions in local and national politics – is damaging the chances of improving the quality of education and its governance.

A policy proposed in Uganda, the introduction of performance-related contracts for head teachers in 2007, was shot down by the teacher unions.

So what’s the answer? The leaks in the system must be plugged, and government must be made to deliver the money it promises schools on time so that teachers get paid. More training is needed for teachers and SMCs. Better, and more frequent inspections too. And information must be made available for parents on school noticeboards. National-level campaigns to get parents, civil society and local communities motivated and involved in the running of their schools could be politically explosive, but very powerful.

Parents need to be made to realise how they, and their children’s futures, are being cheated by the system. Our kids are the disadvantaged, how will posterity judge us in the future?