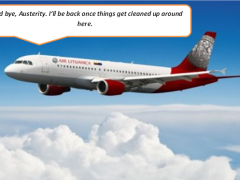 The austerity issue is based on spending less. But if governments spend less, people believe they are being robbed of their jobs and income, and citizens start protesting in the streets. Yet despite severe public spending cuts in Lithuania of a relative magnitude to those in Spain and Greece, Lithuanians have barely uttered a squeak.

A Eurobaromoter poll – a survey that included 27 European states – has shown that Lithuania was one of the main countries which believe that too little is being done to fight poverty[1], but only one major protest has been seen. As the graph below indicates, the real wages of public sector employees rose in Lithuania much faster than they did in on average in the European Union, yet cuts in 2012 also “robbed” Lithuanian public sector workers of 19% of their 2008 income while the EU public secor workers lost an average of 5% and those in Spain 10%. So should Lithuanian politicians be celebrated for finding a solution to tackle such problems or is there a Lithuanian culture that discourages protesting against austerity in general?

Judging by the polls, it seems too generous to attribute a lack of riots to “wise” political guidance. According to a poll conducted by Vilmorus and presented by one of Lithuania’s popular newspapers “Lietuvos Rytas”, the parliament was rated as “satisfactory” by no more than 20% of people surveyed since the late 90s while after the crisis its satisfactory rating dropped to below 10%. By way of contrast, the banks are already returning to 30% approval rating (for figures and analysis, see the website of the Health Economics Centre[2]).

And individual politicians are far from being saintly figures. One politician has disappeared from parliament and neither her colleagues nor relatives are able to say where she went after losing her parliamentary immunity[3]. Another has been mocked by the media who caricatured him as a “flying superman[4]” after he was arrested by the police this July for protesting against the gay pride parade in the capital Vilnius.

Overall, I would say that the Lithuanian “secret of public policy with public support” is to distract the population from the austerity issue by providing them with entertaining alternative issues to talk about.

Is this strategy sustainable and if so, for how long? It seems this is still an open question. Most probably it will last until population starts making mature demands on politicians in exchange for their votes. For example, how has my current representative dealt with the crisis and what steps are expected from the Ministry of Finance?

Another part of the explanation for the relative calm and quiescence has to do with the cultural aspect. Whatever it is, this aspect should be similar in Latvia and Estonia as both countries have suffered deep cuts and recessions while managing to remain relatively unruffled during the downturn. Perhaps part of the explanation lies in a general psychological fear of going against authority. Not so long ago all three states emerged from the clutches of Communism where acting against the state was a matter of life and death. And vestiges of such deep rooted fear may still be vital, even today. Instead standing up and fighting, Lithuanians choose to look for opportunities in another country – or choose to end their lives. Sadly Lithuania is the leading European country (and in some cases one of the global leaders) in terms of emigrants and suicides, while at the same time it lacks a solid trade union base which can organize solidarity and protest.  Out of all countries for which data is available on the World Health Organization website, Lithuania ranked “first” by the number of suicides per 100 000 men (61.3), followed by the Russian Federation (53.9) and Belarus (48.7) and Latvia (40). Finland came in 15th with 29 deaths per 100 000 men, Germany 36th (17.9) while Greece was 76th (6) [5].

Lithuanian leaving all troubles and Austerity behind. Source: Picture from ©DELFI.lt[6], comment added by author

Distracting the public’s attention from difficult essential issues by trivial political shows coupled with Lithuanians’ ingrained distaste for open protest have helped Lithuania win time, avoid chaos and implement austerity. However, austerity is still a relatively short-term solution. Lithuanians will continue to emigrate as long as economic hardships persist at home. It’s time politicians start working on this seriously. Hiring public policy experts may be one of the options as long as this does not result in “grossly inflated salaries” to consultants without long term solutions. Another, could be reforming public institutions from within by, for example, training the workforce and raising salaries. In both cases, however, a lot effort and political will is necessary. This way, once the show is over, there will be someone left to applaud the performance.