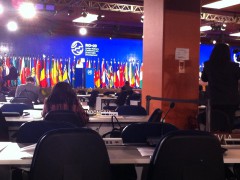 Forty-two years after the first Earth Day on April 22, 1970, the environmental challenges we face have not changed. Earth Day was founded with the intention of increasing awareness of global environmental destruction, and it certainly seems to have been successful in this regard: every year, over 190 countries have participated in Earth Day activities, and the movement has grown so large that the United Nations has designated April 22 as International Mother Earth Day. But the doubling of the Earth’s population and the increasing pressure on natural resources, amongst other drivers, have facilitated the continuation of destructive environmental practices across the world.

Closely linked with the goals of Earth Day is Rio+20, the 20th session of the United Nations Conference on Sustainable Development, which took place in June 2012 in Rio de Janeiro, Brazil. The first Rio conference in 1992, also known as the Earth Summit, is considered one of the most successful UN meetings to date: it created Agenda 21 along with three conventions – the Framework Convention on Climate Change, the Convention of Biological Diversity and the Convention to Combat Diversification. It is not a stretch to suggest that it is considered a seminal moment in the history of the environmental movement – especially in terms of drawing awareness to the challenges faced by the planet.

The focus of Rio+20 was the implementation of the sustainable development principles agreed to in Rio 1992, along with key thematic issues (i.e. oceans, forests, sustainable cities, etc.), and the strengthening of the institutional framework for sustainable development – the relevant UN bodies, institutions, and governance arrangements. In the lead-up to the conference, it was hoped that strong commitments for the future would be agreed upon in the outcome document, aptly titled ‘The Future We Want’. Rio+20 was a prime opportunity for the global community to translate civil society momentum surrounding Earth Day into action, through strong, binding commitments to improve national sustainable practices and natural resource protection.

However, in the aftermath of the conference, Rio+20 has largely been seen as a failure to produce concrete commitments and actions for sustainable development and protection of the environment. Just surveying the tone of the final outcome text is instructive: the word “encourage” appears fifty times and “support” over ninety times, while action and commitment words are much less frequent. For example, “we will” appears only five times, and “must” three times, and we are left instead with a collection of vague ideas to be encouraged but not implemented on any particular timeframe.

With all the hype and media attention it generated, Rio+20 may certainly have met the goals of Earth Day to raise awareness amongst the global community. Unfortunately, translating this awareness into concrete action is always difficult to achieve. With the impotence of the political stage has come the realization that we must look to non-state actors and voluntary initiatives to find true action. Indeed, perhaps the most successful aspect of Rio+20 was the large participation of civil society in side events and the concurrent People’s Summit for Social and Environmental Justice (a 10 day event for civil society including indigenous groups, environmental activists, unions and land rights groups to discuss alternative approaches to sustainable development). These were conceivably the closest expression of Earth Day sentiments to be found in Rio.

The failure of governments to come together and bring a strong commitment to the future bears the question: what and where is the appropriate venue to save the world? If governments are unable to come together in the name of sustainability and for future generations, who will? If we are to continue leaving the task to civil society, we must focus all the more on rallying points such as Earth Day to bring these issues to light and to continue to press for a better future.

Posted on behalf of Karlynn McIlwain.

Born and raised in Vancouver, BC, studying environmental policy, interested in implementation of international treaty commitments (conservation, REDD+, etc) at the local level.