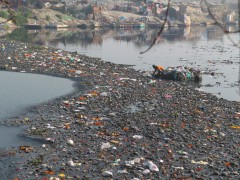 This year will be a significant year for the earth and also for India. February 2nd has the Delhi Sustainable Development Summit 2012 (DSDS) hosted in the Indian capital while the Rio+20 (the Earth Summit) in Brazil in June and IUCN’s World Conservation Congress in South Korea in September are two other major events that India will be actively engaged in.

The river Yamuna, that flows through the Indian capital Delhi has been in a state of crisis for the past several decades.

Can these global congregations of the rich, the  powerful and the wise have any positive bearing on the earth’s future? Can they bring about consensus between the haves of the North and the have-nots of the aspiring South on how to ‘manage’ the earth sustainably?

Dr R.K. Pachauri, director general of The Energy and Resources Institute (TERI) that holds the DSDS annually is actually looking at inputting this year’s DSDS outcomes into the Rio+20 Summit. Pachauri says: “We will be able to provide an input, not just in the official Rio+20 Summit but also to the global community so that they themselves can provide inputs to the Rio+20 process.” When reminded that the two decades since Rio have not seen much action, he takes a cautious line, “… the DSDS will come up with certain correctives and a new road map by which, hopefully, the global community will come to grips with the challenge we are facing.”

Pachauri is frank about what ails the planet. “We got so blinded by the lure, the desire, to consume and produce more and more without really assessing the impact it would have on the environment. I think there is a kind of a frenzy that envelops the whole world,” he says. He is also one of those who are strongly convinced that the current paradigm of ‘frenzied’ growth can go hand in hand with sustainable development.

The theme for this year’s DSDS is, ‘Protecting the global commons: 20 years post Rio’.

For India, protecting the global commons will become yet another major challenge, given that the challenges thrown up by poverty, education and health have still not been dealt with. 2010 and 2011 threw yet another challenge in the face of the Indian people –  this time rampant corruption. So, in a globalized world where the American Way of Life has become a benchmark and a dream, are people in the South willing to forego their aspirations of living life like Americans or Europeans do? Does the SUV owner have the moral authority to tell his brethren to ride bicycles or walk to work?

And herein lies a dilemma, but also an irony. Is it possible for the country to feed its hungry, give work to the unemployed,  shelter to the homeless and education to the unlettered in a world mesmerized by the word ‘growth’? Can India do so without leaving a scratch on the environment? India was placed 125th in the 2012 World Environmental Index released at the World Economic Forum. Now the irony: The UNDP’s Human Development Report 2011 has pointed out that the world’s most disadvantaged people are the very ones who suffer most from environmental degradation. On the other hand, if the country cannot bring the benefits of development to its people, then we are sure to read more stories on ‘human safaris’ for tourists.

Where can India look for a role model? Can it look up to China, currently the number one country for carbon emissions, far ahead of India which stands in third place? The USA? America never ratified the Kyoto Protocol and its per capita emission of carbon is much higher than India’s. European countries too do not exactly make for success stories with their consumption-driven growth and tottering economies. Canada, with one of the highest human development indicators, thought it prudent to walk out of the Kyoto Protocol and shut the door on a sustainable world.

With the rich and the powerful faltering, the second-most populous nation will have to look inward for answers. Maybe Mahatma Gandhi, maybe Rabindranath Tagore can provide them. Gandhi, the anniversary of whose martyrdom was celebrated on January 30, advocated self-sufficiency – an antagonistic term in a world that exports its stuff to the other side of the globe, then brings it back again. Can’t a middle path be pursued? Tagore – India’s first Nobel Laureate – said in Bangla: “Ekla Chalo Re” (continue your journey alone). Can India, in a flippant world, have the courage to walk alone, and adopt a certain global moral steadfastness of the kind the country  showed during its first Prime Minister, Jawaharlal Nehru’s time in office?

Can’t our leaders show us the way? What is it holding them back from forging ahead?

It would be too much to expect grand global conferences to show a direction to the world or resolve India’s dichotomy. In the 20 years since the first Rio Summit, an entire generation has grown up seeing the exploitation of the planet and the never ending rounds of talks to protect it. Maybe the time has come for India to demonstrate that another world is possible, one whose foundations lie in the harmonious co-existence of people and nature.