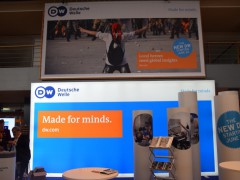 The debate on what international social media platforms get from the African continent can continue over and over but the issue is whether at the end of the day there is any positive results on both sides.

Has Africa been able to get the best out of Facebook, Google, as in the business sense? Have the aforementioned platforms got the revenue that suits their business model? This question is debatable. I believe there should be a level playing field for both parties.

The empowerment aspect has to be there while the desired monetary results should not also be compromised by these corporations. But as to whether it will be at the expense of the Africans, is another issue for a different day.

Well, let’s take a critical look at how a workshop on ‘Africa Online’ at the Global Media Forum demystified the whole notion of Africa’s digital future. Obviously, most digital markets are becoming saturated and all eyes are on Africa as the next destination with its millions of users of the mobile phone and other digital products like the computers.

On the other hand, not all African countries have been able to understand the power of the internet and tried to leverage on its positive aspects. Policies by some governments have downplayed the significance of the use of the internet. Other governments are also on the flipside, gradually getting to understand the numerous advantages that come with it and made use of it to some extent.

Essentially, we all need to understand the policies from these global social platforms. According the head of public policy for Facebook UK, Ebele Okobi the main objective is to make the world more connected. Being more connected means getting in touch with friends basically or marketing your campaigns on their platform. But I think there has been a paradigm shift of the whole idea of internet as most Africans misconstrued it. Is it a case of its dominance across the globe?

Well, its mission has evolved from trying to connect friends to making the internet accessible to all and sundry. In making it available to all, there is a partnership between Facebook and the telecommunication service providers. Usually in any business model, there should be a clear cut strategy for making returns but interestingly, Facebook gives nothing  to the telecommunications service providers and these telecoms in turn give nothing to Facebook according to Ebele Okobi, this in my opinion sounds a little bit bizarre. And this brings us back to the question, is there any hidden agenda that makes it look like empowerment but exploitation? The argument is whether Africa is being used as a digital tool by Facebook or they are actually empowering Africans by giving us more from the website apart from just connecting us.

Participants were quite perplexed about this revelation. This brought up an issue of Africa’s internet problems. If there is any help from these giant media platforms, it should be a case of tackling Africa’s big issue of internet accessibility.

Of course, government policy may cripple this initiative but a good explanation of the whole concept to them will smartly solve that problem. What these governments need to understand is that, the internet can bring positive revolutions like jobs, empowerment and so on. As a big platform where internet has been literally viewed as Facebook, it is imperative it take that big task of changing the minds of government leaders on the fear of internet revolution and helping make the internet available to all. Until then Facebook will be viewed as trying to hide data and information and subsequently exploit the African digital media landscape.

Google’s policy has been simple. Google can pay you basing on the number of ads that have been clicked on your site but there was still a belief it was exploiting African content by trying to take more than offer.

Generally, Africans and other participants at the workshop believe there is more to be done to empower Africans on the internet. I think the digital media has come to stay and it is important we leverage it for greater impact on the continent.

However, the government has to play a big role in providing strategic public policies for internet usage in Africa. Some are leading the way but generally lagging behind. Africa can solve its own problem and get solutions through the use of internet. Web and mobile applications need consistent software to operate successfully, the end user on the other hand need a reliable internet to access the application or software. We can then build software to solve challenges that bedevil us.

If  there should be any foreign participation from big social and digital media platforms, it should be targeted at firstly building the infrastructure for internet before rolling out initiatives for connecting people with the use of that internet. There should be smart ways of doing that and not compromising on revenue as stipulated earlier. With a bigger audience, they can successfully make impact, create value for their products and services and make higher returns while the Africans benefit from the improved accessibility of the internet for its software.

Another empowerment initiative will be setting up more service centres in Africa to meet the needs of the end users and in a larger context, employing competent Africans to run those centres. This is what I call empowerment. There should be even distribution of this empowerment as Facebook or Google can also broaden their reach. There could be some level of government interference through its policies but a lot more can be done to solve the problem of over-exploitation by the foreign influence. We should move from likes, posts and shares to real empowerment for development because Africa’s digital future is a bright one.