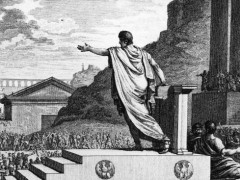 While developing countries move towards the welfare state, European countries need to redesign their welfare model.

European states have become so big they are now unwieldy. Basic safety nets have been stretched to unexpected sizes and because the state supports everything that “people deserve”, it’s getting harder and harder to say what is really useful, profitable or effective and what needs to  be jettisoned.

Subsidies in Europe have a long history. Under the grain law of Gaius Gracchus in 123 BC, a portion of the grain collected as revenue for the state was sold at a subsidised rate to citizens.

Gaius Gracchus, Tribune of the People, presiding over the Plebeian Council, via Wikipedia, public domain

True to the vision of adequate European food production, we do not pay just subsidies alone but also higher food prices. Subsidies for a specific product elbow other products out of the market, which makes it less attractive for farmers, while consumers end up paying the price for those missing products.

Some prices are growing due to regulations, yet the European Commission and other institutions are ready to regulate prices themselves to a level bureaucrats think adequate. Producers usually compensate overregulation in one area with action in another less regulated area. If they can’t do it, then they need to be rescued by subsidies and state aid.

We subsidize public trains and buses, which without subsidies would have no chance of survival. They also have no reason to try and survive. When car production is falling, it’s worth supporting that too.

In the EU we do not fear higher energy prices because they create pressure for energy efficient consumption. But when the biggest energy consumers find they have no chance of competing with the outside world, we will subsidize them to maintain their high spending.

Because support leads to higher taxes and fees, it brings other companies that have to bear the costs of these subsidies to the brink of insolvency. New subsidies would continue to save less effective companies. Yet when it comes to selecting which ones, their connections to high-level state officials play a major role. We have developed companies that are not able to survive in the free market, so they rely on state support.

With higher prices, it’s not just companies that are going hungry. We must also support the people. Thanks to an excessively generous safety net, many of them have no reason to care about the situation they’re in.

We are supporting older people to keep them in the job market. And we are supporting young people, because there are no jobs open vacated by the elderly. Of course we are also subsidizing companies to create new jobs; we are even subsidizing them not to cut back on existing ones.

This policy leads to sluggish economic activity in the poorest regions, so we are spending one third of the EU central budget to support poorer regions in their efforts to catch up to richer ones.

But being European, we do not think that life is just about the economy. That’s why we also subsidize culture, religious activities and sports.

Fortunately, when we are no longer capable of paying for all this, there are banks ready to lend us money. They do not need to worry, because if they get into trouble, we are ready to support them as well.