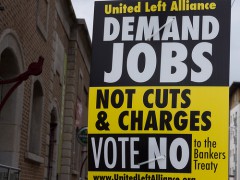 In the beginning, the EU’s main reactions to the economic and financial crises were aimed at salvaging European prosperity from the effects of the American financial crisis [1]. However as time passed and the crises deepened, the EU’s response to the economic problems of its Member States was to slid into a mode of consistent austerity.

In this blog I will look generally at the attitudes of the so-called PIIGS countries (Portugal, Italy, Ireland, Greece, Spain) to European austerity policies, in the context of long-term economic financial crisis. With the IMF admitting in June 2013 that its handling of the Greek situation through severe austerity measures was not the best available option, the question of austerity as the best solution for the sovereign debt crisis has once more returned to the center of the debate on the efficiency of EU economic policies. Italy Spain and Ireland have also been questioning the effectiveness of austerity measures.

The “vox populi” in these countries is increasingly “anti-German” while European institutions are now suffering from an amazing lack of credibility in countries once so enthusiastically pro-European. So the first question we should ask ourselves is why Germany should be so insistant on austerity. One “historical” answer might be found in Germany’s fear of hyperinflation fuelled by memories of what the country went through in the Weimar Republic. Cynics, on the other hand, might just point to the national interests of a country that has not yet felt the full effects of the crisis. Personally I think we can simply explain it by pointing to Germany’s great economic successes in the last decade, largely based on an efficient productive sector and on so-called “ordoliberalism”, a German variant with expense-control as its main pillar. “It worked for us, it will work for you” is quite frankly an honest and legitimate way of thinking. Yet for many economists, embarking on austerity in this general context only increases the risk of negative growth of GDP, sovereign default and political instability – outcomes that make bank failure much more likely . The “No Campaign” in Ireland against the ratification of the Fiscal Compact by referendum on May 2012. Photo by William Murphy, flickr (CC BY-SA 2.0)

Banks – technocrats – welfare cuts: in the mind of “southerners” these concepts are closely intermeshed and they have every good reason to think so. The financial assistance issued by the European Stability Mechanism (ESM) has been largely directed to support private credit institutes instead of entering the real “economic texture” of the countries in need. One widely shared view, along with the idea that austerity is not a proper instrument, is that the EU should focus more on social-oriented policies: summits on “youth unemployment”, seem just like an expedient to avoid adressing real issues.

The measures in the two main treaties -the European Fiscal Pact and the European Economic Stability Mechanism- adopted in the last years, introduced relatively few new elements. The “Golden Rule”, the “1/20 Rule”, the imposed 3% -0.5%, and for exceptional situations the1.0%- deficit limit and the 60% of GDP, were already there before the creation of the ESM and went unheeded, first and foremost by Germany and France.

Citizens are also more and more disgruntled with the processes adopted to enforce these policies, processes which may well be based on economic issues but which are still, and will always be, a matter of political decision. In Italy the balanced budget obligation, a principle contested by many economists, including Paul Krugman, and defined as an “epochal challenge” for the country, was adopted in a peculiarly fast track way and during a night session which caused not a ripple in the mainstream media. We might well ask ourselves whether politicians are really aware of what they are signing or whether they are merely useful malleable tools.

In the “PIIGS” countries the economic crisis created not just a financial, but also a democratic gap which will be very hard to fill. Citizens in these countries feel less and less represented by their elected politicians and are quite pessimistic about the economic and political future of their countries. But, on the other hand,we have to remember that democratic instruments such as referenda, cannot be pursued before a great shared investment in culture and education has been made. In this sense an integrated project for “European scholastic awareness” should be implemented in the coming decades.

In economic terms, the Banking Union project should introduce different perceptions of what social responsibility means whereby society as a whole is not financially responsible for the banks’ mistakes, but rather the banks’ executive levels and the institutions financing or depending on those banks.
The challenge for PIIGS nowadays is a challenge for the whole Europe, which is still, after all, the biggest economy on the world. We have no other choice but to be optimistic.