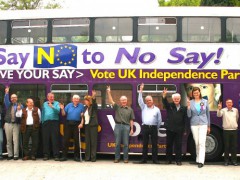 This year’s European elections can definitely be considered the most important since their institution in 1979 and fall during a time where the same ideas of the European project, which finds its original roots in views expressed by figures like Altiero Spinelli and Ernesto Rossi in the Ventotene manifesto.

The European electoral campaign in Italy, a founding member of the EU features Eurosceptic views expressed by political forces like the Northern League led by Matteo Salvini, the Five Stars Movement and minor groups like Brothers of Italy.

Forza Italia, the party of former PM Silvio Berlusconi is not following a complete Eurosceptic party, but its campaign has been characterised by a strong Anti-German stance, even if it is a member of the European People Party, like Angela Merkel’s CDU.

On the other hand, the pro-European views are being supported by Matteo Renzi’s Democratic Party, European Choice (a liberal democrat group that includes Civic Choice  led by the Minister of Education Stefania Giannini, Stop the decline led by economist Michele Boldrin and Bruno Tabacci’s Democratic Center) and by the Greens and the list The Other Europe with Tsipras, that call  for a massive investment in green economy and a EU driven by social purposes, among the many features for an alternative Europe.

In the Belpaese, a country that has seen an higher practice of Asperity rather than Austerity the European elections are mostly considered a national business rather than a broader call that involves the same future of the European project and this view can be represented by the Five Stars Movement’s call for new elections if they will manage to ‘beat’ Renzi’s Democratic Party.

The fact that in a country like Italy, that actually is a founding member of the European Union, the dimensions of the current challenge has not been understood is not surprising, given the very low awareness spread in the country about continental affairs.

Anti-Euro calls are not just unrealistic, but will just manage to put the country in an even deeper crisis that will affect for sure the weaker groups in the society; the claims that the chance to devalue the Italian Lira may change the fortunes of Italian export lack to consider the inflation impact, as well as the fact that such a weak currency would have no space in a world with competitors like the BRICS, for example.

In the Italian political debate, if we exclude the views of European Choice, the Greens and The Other Europe with Tsipras, for as different as they may be, the debate about serious change to introduce in the continental policy, while in the UK debating about Europe appears to be highly unpopular. What can we say of the European political debate in the United Kingdom?

Deputy Prime Minister Nick Clegg challenged Nigel Farage, leader of the Eurosceptic parties in debating Europe and despite the fact that Clegg managed to discuss in depth the potential losses for UK if the country would abandon the Union (such as the 3m jobs focused on the British-European trade), Farage gained the upper hand, giving legitimacy to Eurosceptic views and presenting himself as the champion of British people.

The Tories are increasing their criticism towards the EU, promising a referendum on the UK’s presence in the Union in 2017 in order to face the ‘challenge on the Right’ represented by UKIP: an element discussed by both the parties is the so-called ‘tourism benefit’ by the EU citizens, but as data show the number of EU citizens living and working in the country is perfectly balanced by the number of  Britons living in the  Continent.

The Lib Dems appear to be the more pro-European force, but they are suffering a massive degree of unpopularity  mainly due to their policies  in the coalition government with the Tories, like on the failed promise to scrap tuition fees, which undermined strongly their support among young people.

The Labour Party, under the leadership of Ed Miliband shows a contrasting view on European affairs, expressing its support to a referendum on the EU in 2017 only if there would be a massive transfer of powers from London to Bruxelles.

The Green Party is expected to gain its most relevant result in 26 years and building a strong environmentalist and alternative political block in the future Europarliament.

Even if the two countries are extremely different, under many points of view it is possible to recognize that Eurosceptic forces may gain massive results in the most important European elections in history . The question is if these forces may manage to face the global challenges that Europe will need to face in the next four years.

When it comes to trade, regulation and foreign policy challenges it is extremely difficult for a single member State to play a role in an even more connected global world and the role of the European institutions, renewed European institutions would be fundamental in playing this pivotal match.

The anti-European forces’  aim is the one of undermining Europe starting with their institutions and this explains how despite their differences, there is an attempt to build a pan-European Eurosceptic network, especially on the far right side, with Geert Wilders’ Freedom Party and Marine Le Pen’s Front National.

The main feature that connect Eurosceptics are xenophobia, a despise for European institutions and the European project as a whole,   even if there are some differences like the Five Stars Movement.

The Eurosceptics gains are based on the strong disaffection spread all over the continent towards the future of the Union and their views are favoured by the communication issues of the main political families like the People’s Party and the Socialist Party.

Xenophobia, protectionism, isolationism cannot have place in the future of a successful super-national union and the answers to similar policies can be seen in a path to some forms of federalism, the implementation of strategies like Europe 2020, a serious discussion on the Eurobonds and a project of a different mandate for the European Central Bank, with a focus on full employment and not just on inflation control.

Clearly, this path will require a different attitude from the mainstream political group, by requiring a progressive distance from national interests……even if it is early to say that Eurosceptics will bring the end of Europe as we know it, this may be the last call for a progressive institutional and social reform.