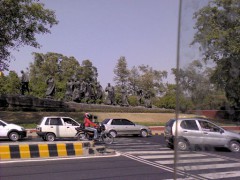 I can well imagine the slack jawed  expressions on some our front benchers’ beatific faces on seeing political cartoonist Aseem Trivedi’s cartoons on the net. Personnally I didn’t think they were extraordinarily funny  and were more the work of an amateur artist. Yet the portrayal of the three lions in India’s national emblem as three wolves, their fangs dripping blood with “long live corruption” (Brashtacharmeva  Jayate)  inscribed beneath them, and the Indian Parliament depicted as a giant toilet bowl somehow gave the professional handshakers and pencil pushers chronic indigestion!

Accused of uploading “ugly and obscene” cartoons on the web, Trivedi was arrested  in Mumbai on 8th September when a 3rd year law student made a private complaint against him. He was jailed for two weeks – for ridiculing corruption among India’s elite and mocking the Indian constitution. He refused bail initially for the sedition charges against him but finally relented.

Obviously, this sparked great uproar  and outrage among free speech and anti-corruption activists as they saw it as an attack on freedom of expression. Not to mention that section 124 A of the Indian Penal Code on the law on sedition introduced during the Colonial era  was deemed “archaic” like many of our other laws which need serious revision. This law describes sedition as a criminal offence punishable by life imprisonment. Although the Supreme Court of India says that sedition requires incitement of violence, Trivedi’s cartoons did not in fact provoke any violence.

A set of eleven statues erected near India Gate, New Delhi  pay tribute to a group of Indian freedom fighters and social reformers.: Jayanta (Jay.Here at en.wikipedia) on Wikimedia Commons CC BY 3.0

Some disgruntled citizens, politicians and government officials  were of the opinion that a line should be firmly drawn between insulting national symbols and freedom of  expression.

Let’s listen to what Suman Dubey, founder of  Admissions Consulting, Gurgaon has to say on this turn of events. “It’s really sad that such small incidents are getting so much attention. Why are people  so sensitive about the wrong things? People can live comfortably looking at starving children, beggars, injustice against women, but they take offence at a harmless cartoon. We need our heads checked. In the US, people wear the flag on their shoes and as bikinis-nobody gets offended (may be the degree of offence also differs from culture to culture). Actually respect should be in your heart. It doesn’t matter what Trivedi was doing-it’s a trivial thing. He is a nobody. Why should we react to every damn thing around us. We are tremendously reactive and sadly for the wrong reasons. The cartoon had no impact at the ground level  and did no harm nor good.”

Dubey holds the government accountable for Trivedi’s arrest and comments that it wants the public  to be reactive and not to ask  awkward questions about the real problems – actually distract their attention away from them. He believes that the government will also do whatever it can to create fear in people so that they don’t protest.

Another citizen, Udayan Chakravorty, director of Radius Equipment Pvt. Ltd , Mumbai feels that Trivedi himself  is a angry young man quite  low on talent: “Pretty stupid cartoon quality as such – not even funny or sarcastic but he got caught for his political leanings”.  He has similar views to those of Dubey on a couple of matters. “We Indians are pretty thin skinned. We react very fast. It’s only because Trivedi was with the India Against Corruption group  that the government asked the police to act against him”.

Aseem Trivedi is also campaign founder of ‘Save your Voice‘, a movement for freedom from internet censorship started in April 2012. Two months after launching the website was blocked for  its objectionable pictures and texts related to the flag and emblem of India.

Both fellows agree that freedom of expression is fundamental to a democracy  and  that the government has violated freedom of expression by making the arrest and charging Trivedi with sedition which is a grave offence. It is well known that ever since Colonial times most Indian laws have been used  by the “rulers” against the “ruled” and now are being used by the ‘representatives’ against the “voters”.

Dubey further argues that though freedom of speech should be protected, one cannot just take umbrage at violations of freedom of speech and not at violations of the right to safe drinking water or safe roads.“Aseem Trivedi is a left intellectual with intellectual support. If a porter on the street protests about the violation of his right to drinking water, he won’t get much support will he? A country is only as good as what it chooses to tolerate. A developed country won’t tolerate the violation of the right to drinking water. We would- so that’s why we are what we are. People don’t like being shown a mirror”.

It’s true that here the educated and the intelligentsia always get preference but what really matters is that this incident did highlight corruption among politicians and the right to freedom of expression. And what does this mean? Freedom of expression is fundamental to a democracy and the government has no right to curb it or even inflate matters in attempts to tilt the scales of politics!