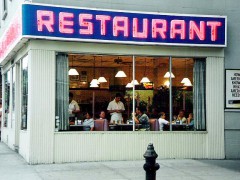 Television shows like Friends and Seinfeld may have inadvertently been among the best things to have happened to the environment over the last few decades. These shows are not about environmental issues. They don’t cause people to want to be environmentalists – at least not directly. Instead, these American sitcoms, in a very unassuming way, promote urban lifestyles that incidentally happen to be quite good for the environment.

Friends and Seinfeld are among the many shows and movies that take place in Manhattan, where I currently live. The lives of the characters in the shows are ordinary by Manhattan standards but quite different from most of America in that they live in apartments and get around town mainly on foot or public transit. This urban lifestyle requires much less energy and other natural resources than the suburban lifestyle of houses and cars.

The popularity of Friends and Seinfeld coincides with the growing popularity of urban lifestyles among Americans, especially young adults. And it’s not just in Manhattan. In my home city of Pittsburgh, one of the few neighborhoods with new residential construction is downtown, where high-rise condo buildings are squeezed between office buildings, restaurants, and theaters. I have a few friends living there, and they say it’s fantastic.

Pittsburgh’s The Encore, built in 2006. Photo by Seth Baum

It is very difficult to say how much credit television deserves for America’s urbanization trend. I’m not aware of any research scrutinizing this, though other research has found, for example, that soap operas appear to have helped lower fertility rates in Brazil. For American urbanization, there certainly are other factors besides TV contributing to the trend. One factor is the rise of cell phones and smart phones, which makes the out-and-about urban lifestyle easier and more enjoyable. But it is indisputable that these TV shows piped the urban lifestyle into millions of suburban homes across the country. For children growing up in the suburbs, these shows showed that the urban lifestyle was not so strange, and indeed could be fun and exciting. The fact that it’s also environmentally superior might just be a nice side bonus.

The United States still has a long way to go before the bulk of its population lives an environmentally friendly urban lifestyle. Despite the urbanization trends, most Americans still live suburban lifestyles – much more than in other industrialized nations such as Japan or Europe. And it will take a lot more than just shifts in Americans’ desire for an urban lifestyle: our cities need to be rebuilt on a very large scale. Along the way we’ll inevitably face some difficult decisions, such as what to do with all those old suburbs that no one really wants any more. But for now, at least we can take comfort in the fact that the trend is starting to move in the right direction.

Meanwhile, countries like India and China are rapidly shifting towards car-based cities and transport. It would be highly hypocritical for the US to tell them to do otherwise. However, we can lend some friendly advice. We can speak from experience against cities that leave us stuck in endless traffic jams and remote from culture and commerce. Ideally, the developing countries would ‘leapfrog’ over the suburban state and go directly to the highly modern, highly desirable, environmentally friendly urban form, just as they’re often leapfrogging over landlines and going directly to cell phones. Here it helps that TV and movies (whether American or otherwise) is available to demonstrate that the urban lifestyle is convenient, fun, and generally desirable.