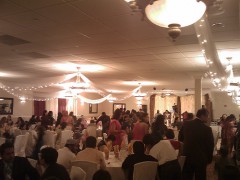 Still from a lavish South Asian wedding – Photo by Besz on Flickr (CC BY 2.0)

We all want our weddings to be a great affair where everything is ‘grand’ – from the bride and groom to the dresses and the food served at the party. However, not everyone can afford to celebrate in the ‘grand’ style in these economically straightened times particularly when the traditional wedding in Pakistan is spread over a whole three days. This is why a few years ago the government of Pakistan put a restriction of ‘One Dish’ on the wedding lunch or dinner. As far as I am concerned, I see this as a very positive move for the benefit of those who cannot afford to spend a lot of money on a lavish affair. Therefore, I propose and recommend One-Day Economic weddings to further support financial position of the people.

The problem is that in Pakistan if a wedding does not meet traditional expectations, it becomes a mark of disgrace for the families involved. So each family has to struggle, sometimes desperately, to come up to the standards by arranging a lavish – and very expensive – banquet. So the government in Pakistan took a very intelligent step in 1997 by limiting the wedding celebration to One Dish only. A traditional wedding mean involves at least 4 main courses which might be rice, chicken curry, beef curry and barbeque with drinks, salads and desserts as extras.

Cutting down on the wedding banquet does relieve people of a burden as there are other things that need to be taken care of when a couple is getting married. They need a new home with all the fixtures and fittings from bedroom carpet to kitchen equipment. The tradition here is that the family of the bride helps the couple start their new life by giving a dowry – for items like a bed, air conditioning, a new TV etc. In current economic terms, a menu with 4 main course meals and other dishes costs approximately 4 Lac Rs ($4000) each day – a huge amount that could be more usefully spent on setting up the couple’s new household. Here is one case where people talk about the savings they made due to this one-dish law.

I believe this austerity measure has benefitted the economy of the country, and I would like to see it extended to enable the instigation of the One-Day weddings.

Given the present financial difficulties many people are laboring under, I believe that only One-Day weddings should be allowed in the country. This would save a lot of money for the families and the couple, and resources for the country as well. The three-day wedding is a lengthy and dauntingly expensive affair for the families of both the bride and the groom. .The first day is the Henna function, the second day is Baraat (the bride leaves her parents), and the third day is Walima (the reception  where the bridegroom celebrates the arrival of the bride at his home). Most of the time, there is also competition between the two families as each one tries to outdo the other in terms of magnificence. However, most of the time, almost half of the meals are left over – which is a waste.  India has also considered implementing the same law to save on food resources. According to a report, 20 % of the food goes to waste in a lavish wedding.

The One-Day weddings would also save on two days worth of costumes. Bridal wear costs between $400 to $4000 PKR for the couple and their families – not to mention savings on two days of food and drink which can be from $6000 to $10000 – all money better spent elsewhere.

I have seen many instances where people have considered one-day weddings and the response was very positive. I have also discussed the One-Day wedding idea with many people and most of them agree with it. This is a sign of awareness and understanding in the people who realize that a marriage should not be an expensive or difficult affair.

By One-Day weddings, I do not mean to suggest any compromise on cultural traditions. All the important parts of each day can somehow be incorporated into only one day as well. I only wish to emphasize the use of wisdom for the need of the hour.

Awareness needs to be created among people that subscribing to such austerity measures is for their own good. It equally needs to be emphasized that saving national resources and utilizing them in an appropriate manner rather than squandering them will bring them a huge amount of respect. Such intelligent austerity measures can improve the living standards of individuals and the country as a whole.