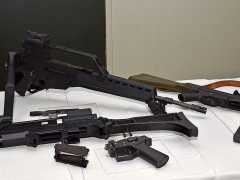 Germany has an official agenda of supporting democracy and peace. However, the German arms industry sells weapons to dictators or conflict-suffering regions, sometimes to the detriment of even the country’s own interests.

German Heckler & Koch G36 assault rifles have allegedly been found in the hands of pro-Gaddafi soldiers in Libya. flickr/Dirk Vorderstraße (CC BY 2.0)

Compared to other NATO-states, Germany is generally reluctant to engage in wars. The most recent example is last year’s Libyan War as the German army didn’t attack even if its close allies France and the United Kingdom did. However, the German weapons industry is the biggest exporter in Western Europe, second only to the United States and Russia. Furthermore, these exports are directed to countries with an unstable political situation such as Greece, countries in conflict like Israel or even dictatorships such as Saudi Arabia, all with the agreement of the German government.

Germany’s skepticism towards the army

Germany likes to see itself as an aloof, anti-militaristic country. After the trauma of the Second World War, the country has been strongly reluctant to send troops abroad. This is essentially due to a very restrictive Constitution regarding military engagement: the Parliament must in case of a desired military intervention agree to a formal request of the government with detailed information on the number of soldiers, the type of engagement, the costs caused, etc, which isn’t likely to happen due to the general scepticism of the public towards war.

In the last 60 years, the German army has actively participated in three external military missions and these nevertheless caused much public protest: Bosnia in 1995, Kosovo in 1999 (both essentially with logistical functions) and Afghanistan since 2001. Germany did not participate in the Iraq War of 2003. Having by far the biggest population of any nation in the European Union, the country has the third-biggest military spending and manpower after Great Britain and France. Germany is not a nuclear power.

Interestingly enough, German participation to the NATO mission in Afghanistan had been for a long period described by the government as a humanitarian action. Because of public pressure, increased military action, and infamous German-ordered Kundus airstrike of 2009 that accidentally killed over 90 civilians, the Minister of Foreign Affairs finally described for the first time the mission as being part of a “war”. This notably allowed soldiers responsible for the manslaughter to not be criminally responsible under German law.

It is therefore all the more striking that the same government, so eager not to hurt its public opinion and so reluctant to act militarily, is allowing the German arms industry to sell weapons and war materiel to dictatorships and countries in conflict-suffering regions. The government could actually block these dubious exports: each deal has to be approved, albeit deciding behind closed doors. But it doesn’t.

One of the very controversial countries with significant ties with the German war industry is Saudi Arabia. Between 2000 and 2009 the German government approved €675 million in military exports to Saudi Arabia, including various radars devices, border security systems, communication devices, spare parts for jets, missiles and grenades. Furthermore, since 2011, the Saudi state-owned defense firm Military Industries Corporation (MIC) has produced licensed G-36 Heckler & Koch assault rifles in its own factory. German rifles produced on Saudi soil are naturally not counted among German exports.

In July 2011, the Saudi government expressed its interest in 270 Leopard 2A7+ tanks from Krauss-Maffei Wegmann, which could represent a €3 billion deal, more than the entirety of German weapons exports in 2010. The German government hasn’t taken a decision yet, but in July 2012, the army sent a Leopard tank and an officer to the Saudi desert in order to complete some tests.

Practically, the German army is acting as a sales representative for the German weapons industry, in this case with the absolutist Islamic monarchy of Saudi Arabia. As the German Foreign Office itself points out, Saudi Arabia has no Parliament, forbids political parties, strongly restricts the freedom of the press, of assembly and of association, imprisons human rights activists and don’t grant women with legal personality. At the beginning of the Arab Spring, in March 2011, the Saudi King Abdullah bin Abdul Aziz sent 1,000 soldiers to authoritarian Bahrain in order to crush the rebellion.

Germany not only delivers military materiel to dictatorships, it also sells arms to countries in conflict regions. In July 2012, the magazine Der Spiegel revealed how German submarines have been sold to Israel, which equipped them with nuclear missiles. The government stated that the future armament of the submarines was not of their concern and that it won’t participate in speculation about it. Enlarging the range of Israel’s nuclear capacities, especially in light of its repeated threats of a first strike against Iran, could contribute to instability in the Middle East. On the top of this, in September German submarines were also ordered by Egypt, a country whose position towards Israel is unclear.

Furthermore, the Indonesian president has said that the possibility of buying hundred German tanks had been discussed with Angela Merkel during her visit to the archipelago in July. The German chancellor declared that she didn’t receive any formal request. Many human rights activists believe these tanks could be used against the Indonesian population. The Indonesian State has a history of brutal violence, with over 500,000 killed in the anticommunist purges of the 1960s and with the brutal occupation of East Timor, which ended only in 1999, that killed up to a quarter of the population. The regime’s current status as a democracy remains questionable.

The question of the traceability of weapons also remains open. It has been reported that German rifles have been found in the hands of the late dictator Muammar Gaddafi’s soldiers, even if Germany formally respected the embargo against Libya which was enforced until 2004 and didn’t have any arms deals (but still some equipment deals on electronic jamming devices) with the country afterwards. Where did these weapons come from?

Evidently, Germany is becoming an increasingly desirable business partner in the weapons industry. According to the most recent report of the German government, Germany’s business in weapons of war grew from €1.3 billion in 2009 to €2.1 billion in 2010 (+61%). According to figures from the Stockholm International Peace Research Institute (SIPRI) , Germany exported in 2010 more weapons than the UK and France together and is the third exporting nation after the US and Russia. On a larger scale, Germany’s arm exports rose by over 96 % between the periods 2001-2005 and 2006-2010.

The same German report states, reassuringly, that in 2010 nearly 80% of German weapons and material were sold to EU and NATO member countries, Australia, Japan, New Zealand and Switzerland. But is this so reassuring?

Taking a closer look at the SIPRI figures, it appears that in the 2006-2010 period Greece has been the first (15%) and Turkey the third (10%) buyers of German arms, both being NATO countries. Even in 2010, the year where the Greek crisis started, the Hellenic state spent €403 million on German war technology. The German liberal daily Die Zeit even suggests that the German government pressured Greece on these deals.

Aside from the fact that selling weapons to two conflicting countries (Greece and Turkey) may not be the best way to assure stability between them, the Greek crisis should bring us to think about the legitimacy of weapons selling even to EU or NATO members.

Two years ago nobody would have questioned Greek democracy’s stability. Today, who knows where Greece will be in two years’ time: still in the euro, the EU and NATO? The basis of the Greek traditional political spectrum has been destroyed and only the conservative Néa Dimokratía survives as an empty reliquary of the past system. At the same time, the “hard” socialists of Syriza have risen and nearly won the elections in June while the fascist party Golden Dawn has reached up to 12% support in the polls. Who can assure today that Greece won’t fall to an extremist government in the near future if the economic situation continues to deteriorate? Through elections or a military coup, as happened in 1967 and leading to a seven year long dictatorship? Who can assert what a hypothetical extremist Pan-Hellenic government would do with the weapons that have been sold to earlier governments?  What about FYROM, Turkey or North Cyprus? Could the Balkans be set alight and bring Germany, once again, to act militarily for peacekeeping in the region?

Stability is temporary but the weapons trade operates as if it was eternal. And as the German government is now considering boosting its military exports by loosening the authorization procedures, it should think that an excessive support for the arms industry, while perhaps meaning more money today, encourages the likelihood that Germany will face new conflicts on its doorstep in the future.