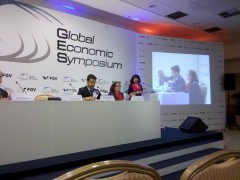 The following article deals with the topic “Implementing Board Diversity,” which is currently being discussed at the Global Economic Symposium in Rio. The author intends to enrich the discussion at the symposium with her personal stories and ideas.

Implementing Board Diversity Panel at GES 2012 | Photo by the author

Numbers don’t lie: having women on boards is good for society, for the economy and, more importantly, for shareholders and company profits.

Irene Natividad, the moderator of the Implementing Board Diversity panel at the GES, was a strong presence in the room. With all the data, facts and examples memorized, she not only gave a speech about the topic but also questioned the participants about important issues.

One of the most interesting facts about this group was the different backgrounds of the panelists: different countries, careers, ages, opinions. Of course, they don’t agree on the best way to implement diversity — whether to implement quotas for women or not — but they all agreed with one sentence: the diversity on boards won’t change naturally. It must have a policy to follow, from government or from the private sector.

In other words, they all seem to agree about the importance of bringing women on board. However, how to do it?

I believe the first step is to recognize that there’s a problem with not having women on companies’ boards. As obvious as it sounds, it was stated that most companies don’t recognize that.

One example was given during the panel that exemplifies all the discussion: the lack of women in American orchestras.

A group realized that there weren’t many women there. So, they thought: “we have a problem here. Maybe we’ve been discriminating in some way we don’t even realize.” (Step one taken: recognition.)

So, they went to the second step: action. Since the criteria for being a good musician is the music, they started doing blind auditions. With curtains, the hiring committee could only judge the talent of the applicants by their music. Also, after the first experiments, they had to put carpeting on the floor so they couldn’t hear the women’s high heels.

What happened after all of this? Instead of women making up five or ten percent of orchestras, the average increased to fifty percent.

“It’s known how the hiring process for board committees works: informality rules.” In other words, men hiring friends/colleagues = men hiring men. Companies that have a policy of promoting board diversity (or that want to) may want to think about it: diversity on boards doesn’t mean only more women. It also means bringing in more people (men and women) from different backgrounds.

What caught my attention in particular was the “to bring qualified women” sentence. We don’t hear the “qualified” word for men; however, apparently for women, only the ultra-achievers can be hired. But an average male friend on a board is OK.

Despite the great panel and its incredible participants, a question remains: how do we promote this idea to people who don’t even consider it an issue? How do we show them the importance of gender balance within companies?

That question, in my opinion, leads to a polemical answer: when the private and public sectors don’t know how to fix their own problems, it’s time for society to take action. Asking for government solutions or not, we should emulate the orchestras: the power of our voices has to be stronger than our prejudices.