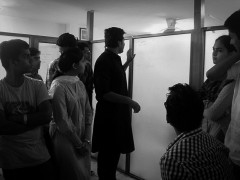 Feudalism is defined as “a system for structuring society around relationships derived from the holding of land in exchange for service or labor.”

Considering the effects of the feudal system in Pakistan, I would define feudalism as a tool for using the power of land ownership to obtain illegitimate control over commoners’ lives. Feudalism is one of the root causes underlying unfair agricultural practices, inequality in the labor market, and poverty in rural Pakistan.

What follows is a photo-story that seeks to shed light on this issue.

While discussing a community service project, volunteers heatedly debate whether to conduct a week-long educational program for peasants in a rural area of Pakistan. “The landlords would not let us do that,” one of the volunteers argued.

Having been raised in a Pakistani village for about thirteen years in a middle-class agricultural family, I am intimately familiar with this issue.

Feudalism has been a big problem in Pakistan since the country’s birth in 1947. Following independence, the Indian government was able to restrict the power of India’s landowners through land reforms, but feudalism persists in Pakistan.

Education is poison to feudalism as would lead poor workers to dream about better pay, working conditions, and lifestyle, making it hard for feudal lords to perpetuate their cruelty.

Even the children of agricultural laborers are forced to work rather than getting an education.

Agricultural products are some of Pakistan’s biggest and finest exports. But unfortunately, the huge profits go into the pockets of the landowners – people who do not even directly contribute to the production of the crops.

All the work is done by the peasants for very little pay.

And thousands of poor households remain dependent on a few upper-class landowners for their survival.

Almost half of Pakistan’s labor force is dependent on agriculture – which constitutes about twenty percent of the country’s total GDP. On the other hand, “five percent of agricultural households own nearly two thirds of Pakistan’s farmland.” As a result, a handful of people have authority over the labor force, their wages, and working conditions.

The feudal lords have enough power to influence the decisions of the government and politicians. In fact, Pakistan has a history of feudal families forming their own political parties and governments on both the federal and provincial levels. So, there is practically no check on their power, and they do whatever helps their businesses grow – for example, operating private prisons and carrying out kidnappings and brutal killings.

Moreover, because they possess vast tracts of land, feudal lords are able to control the distribution of their area’s natural resources, such as canal water. Families that own small parcels of farmland thus do not get equal opportunities to farm their lands to capacity.

Hence, most of the profits from agricultural exports – sixty percent of Pakistan’s total exports – are enjoyed by just a handful of people.

Feudalism has definitely caused the over-centralization of money, power, and control in Pakistan. While agricultural trade is growing in the country day by day, no positive effects from this growth can be seen in workers’ lives. Policies should be implemented to ensure the appropriate distribution of trade income, so the land owners are not the only ones benefiting and the workers are paid what they deserve.