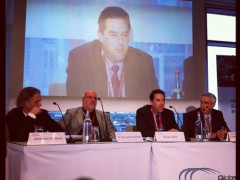 The Internet, multi-layered system of networks, protocols, hard- and software, and finally users, is taken by many for granted. To more than 2 billion people every day it provides news, e-mails, airplane tickets, Facebook likes and valuable tweets, Saturday lolcats, etc. No one cares how things work until they work well, right?

Some things are being said, some - not. Opening of the "Internet Governance Structures" panel at the Global Economic Symposium. Photo by Alexey Sidorenko

As with many revolutionary innovations, the Internet grows faster than the capacity of humans to appreciate its effects fully. The issue, however, is not just in the experts’ ability to finally put an end to the discussion, wherever social networks were a catalyst (or at least an important factor) of the Arab Spring.

The true issue with the Internet is that very few people can actually understand and engage with the debate on Internet governance. The lack of intelligent debate on Internet governance issues among the general public in the time when crucial decisions are being made is a significant systemic risk not just for the Internet itself as a technology, but for the world, a significant part of whose GDP (around 10 percent of the current global GDP) is produced via the internet.

I spent the last week in Nairobi, Kenya at the Internet Governance Forum (IGF). The IGF press coverage wasn’t very wide – a few Internet governance-related blogs, several country newspapers had covered just a little bit of what was discussed on the forum. The Economist magazine (see the IGF coverage here and here) provided the most detailed image.

As a writer at Global Voices Online, I also published a short article in which I summarized a few trends of the UN-sponsored conference. When I asked my colleague, also an Internet analyst, what he thought about the article, he said that I should better explain all the technical terms that I used, since common readers wouldn’t understand what DNS (Domain Name System – a system that coordinates IP-addresses and domains (do I need to explain what IP-address is or a domain is?)), or what a multi-stakeholder model (model of governance that involves all interest groups, like businesses, governments, researchers and the civil society) is and why it is important.

This week I’ve encountered a common situation. When I came to Kiel to attend the Global Economic Symposium, and wanted to discuss the upcoming panel on the Internet Governance Structures (ended few minutes ago, the coverage of the main debates will follow), another colleague of mine, said he’d love to visit it but he was afraid there were too many technical issues that he might not understand.

And this is a broader issue: many important policy makers sometimes confuse the principle of Net Neutrality (general approach that the information distributed via the networks shouldn’t be discriminated by the providers) with the principle of neutrality in an online conversation.

The journalists do not want to ‘shift’ to this topic. Some think it’s purely technical, some feel that it’s too complex and not interesting. A surprise for them:­ the current state of the debate is highly political, wherever it concerns privacy, security, freedom of speech or mobilization via social networks. Not to mention the key question of international governance itself – whether it will be controlled by the governments or by a multi-stakeholder community.

Indeed, the current education system has many more people capable of discussing the world economy or the global financial system than Internet issues. There are simply more experts (graduate students, post-graduate students, pundits, politicians, alterglobalists if you prefer).

The skeptics would say: “OK, but the abundance of economy students still doesn’t prevent the world from getting into financial crises every 10 years.”

To my mind, at least, it’s being discussed and the state of debate is accessible to the general public.

As for Internet Governance education, there are (in sharp contrast) just a few initiatives in various universities across the globe that are planning (some already introducing) the courses on the topic. The outcome of these educational innovations will be seen only in few years, probably after some crucial decisions are already faits accomplis.

As Alessio Brown, executive director of the GES, said yesterday at the opening session, the Global Economic Symposium is a solution forum, not a discussion one.

If I’d have to contribute, my solution would be – educate people, journalists, educators themselves, about the Internet Governance before it’s too late and to prevent some avoidable mistakes.