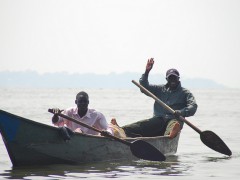 Uganda is gifted by nature. Actually, some of the first outsiders to visit the East African country nicknamed it the original Eden. The fertile soils, beautiful and evergreen grasslands, undulating hills, mountains, natural forests, and freshwater bodies all add to Uganda’s natural endowments.

Mountains, forests, and water bodies play a crucial role in regulating climate. If well protected, they can help in preventing a climate catastrophe. But, recent studies indicate that these natural resources in Uganda are seriously threatened.

Lake Victoria, the world’s second largest freshwater body, is under threat from human activities such as overfishing, pollution, and careless drying of the wetlands that contribute some of the water to the lake. The lake is shared by Kenya (5%), Tanzania (52%), and Uganda (42%).

An oil palm planter in the Kalangala Islands is cultivating on the shorelines, exposing the lake to silting. Lake shorelines must be protected because of their ecological importance. Simple geography lessons tell us that lakes, like other water bodies, play a crucial role in rainfall formation and in moderating the climate.

Over the last ten years, the water levels in the lake have been receding. A report by the UN Food and Agriculture organization notes that “in Uganda, the reduction of water resources due to climate change has weakened hydropower generation, leading people to turn to wood fuels (charcoal) for energy – and fueling deforestation.”

Relatedly, according to the National Forestry Authority, the majority of Uganda’s deforestation is happening within the sixty-four percent of forests that are privately owned, where the government has limited ability to control it. Even Mabira natural forest, which is also crucial to weather and climate moderation, has been nearly wiped out by illegal lumbering, and a sugar baron wants part of the forest to expand his sugarcane plantation.

Forests play a key role in regulating climate as they absorb carbon emissions that would otherwise destabilize the atmosphere. Natural forests like Mabira also act as watersheds; the Ssezibwa River, which empties into Lake Victoria, has its catchment in Mabira forest.

The glaciers on Mount Rwenzori and other mountains in East Africa are on a steady decline. Farmers who depend on these mountains for their livelihoods are already complaining of extreme heat and experiencing climatic changes. Growing up on the slopes of the Rwenzori Mountains, there were days when we never saw the sun because of all the rain throughout the day.

Such days are now a very rare occurrence. The mountain is heating up, and floods have resulted.

Mountains are important in the formation of relief rainfall and in balancing the ecosystem. A recent study by the United Nations Environment Program says Uganda, Kenya, and Tanzania risk losing tourism revenue from mountaineering as the snow on mountains like Rwenzori, Kenya, and Kilimanjaro decreases.

In eastern Uganda, people living on the slopes of Mount Elgon have experienced devastating landslides. The trees that protected the mountainous soils have been felled to make way for agriculture. The recent landslides have displaced close to 10,000 people from Mount Elgon and destroyed their homes and crops.

It is believed that the this year’s drought, experienced from April to mid-August in most parts of Uganda, was caused in part by the destruction of the environment. During this drought, many people in the country reported serious crop failures and animal deaths due to lack of pasture.

If the destruction rate of the climate regulators such as water bodies, forests, wetlands, mountains, and marshlands continues at the current unchecked rate, Uganda’s beauty – East Africa’s Eden – could be robbed.

Everyone must take action to protect the environment and precious natural resources to avoid an impending climate disaster.