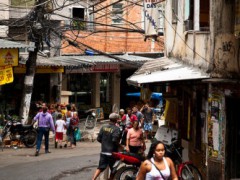 A recent study from the United Nations Development Programme (UNDP) revealed that ten out of the fifteen countries with the most inequality are found in Latin America — despite the fact that income inequality has decreased over the last ten years in nearly every country in the region. During that same time period, Latin American economies have grown at an annual average of more than four percent.

This report was published during the Sixth Ministerial Forum for Development, which took place the first week of July 2013 at the United Nations headquarters. The report indicates that Paraguay, the Dominican Republic, Peru, and El Salvador are among the poorest countries in the region. Brazil, Honduras, and Colombia are the Latin American countries with the highest income inequality, according to the World Bank.

There have been many attempts to explain Latin America’s historic inequality, citing geographic, religious, cultural, institutional, social, political, and even racial factors. The truth is that our inequality is structural, transversal, and persistent. Not only that, it is a challenge to the benefits of democracy and the free market. Another factor is the prevalence of powerful elites who have never fully identified with their countries and instead see themselves as European or, more recently, North American.

Nevertheless, there is growth, and beyond the numbers and indicators, there are interesting details: Carlos Slim, the richest man in the world, is Mexican, and of the list of richest people in the world, almost 10% are also from that region. On the other hand, 168 million Latin Americans (29.4% of the total population) lived in poverty in 2011.

In addition to the ultra-rich and those below the poverty line, there is a segment of the population that statistically barely surpasses the limits set for poverty (a daily income of $1.25), meaning any crisis would send them abruptly into poverty. The members of the middle class, too, lack security in their position as they face the day-to-day ups and downs of the Latin American economy.

Most governments in the region have social programs aimed at the poorest as a way to reduce inequality, but as in the case of Mexico, they tend to fail in achieving their objectives. Many of these programs do not go beyond mere assistance, as in Nicaragua, or they fall victim to corruption and patronage systems. Thus, for those who are tempted to see Latin America today as an example of progress: just because, in theory, there are fewer people living in poverty, it does not mean that, for example, children are healthier or better educated. Inequality is not solely economic.

Furthermore, it is important to look at whether the macroeconomic and administrative policies of the various governments are effective. Some governments have exchange restrictions, subsidies, and other measures that border on populism, such as the governments of Bolivia, Venezuela, Ecuador, and Argentina. Whereas, other governments follow the neoliberal model and negotiate free trade agreements, like those of Colombia, Chile, and Peru. Nevertheless, as evidenced by the data, none of the countries of the region can lay claim to economic equality — no matter what economic model they apply.

Governments have not only failed to equally distribute the proceeds of economic growth, but they have also failed to take advantage of this economic bonanza to support production models that go beyond extractivism and exportation of raw materials. So far in 2013, the prices of many products, mainly minerals but also agricultural products, have seen a global decrease, primarily due to slower growth in China and the global crisis. Given that Latin America’s main exports are agricultural and mineral products, is Latin America running the risk of returning to a lean period? And if that is the case, are we prepared to withstand a new period of crisis? With larger urban populations than during the crisis of the 1980s, would there be a risk of large-scale protests and social unrest? Only time will tell.