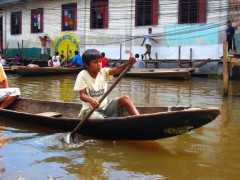 Brayan Tapullima is twelve years old and lives happily on the banks of a river in the warm Peruvian jungle. Every day, he travels to the nearest school in a small canoe, a trip that takes about half an hour. There, he studies and plays with other children. Later, he returns home and continues playing or helps his parents. Although he knows he does not have a television or electricity, he would be surprised to learn that he is considered to be in one of the poorest sectors of the Peruvian population, and in fact, he probably would not understand it.

When he goes to the city, he always sees children who are dirty, drugged, and begging. To him, that is poverty. Brayan likes the city, but when he grows up, he wants to be like his Uncle Vladimir, who goes back and forth along the river and always has interesting stories to tell — or perhaps like Don Lorenzo, the Apu (leader) of the community, whom everyone respects.

According to recent studies, nearly nine million Peruvians are now in the middle class. This number includes the “emerging middle class” – a new term used to label those who have escaped poverty. But according to sociologist Julio Cotler, their situation is very precarious, and “sixty percent fall into poverty if they catch a cold. It is on the edge.”

The Inter-American Development Bank (BID), citing a World Bank study, points out that thirty-eight percent of the Peruvian population is vulnerable, meaning they have a high probability (ninety percent) of falling back into poverty. Some eleven million Peruvians view themselves as poor, which economist Álvaro Monge characterizes as “a feeling” because nominally and statistically they are not. So, we have two diverging perceptions of poverty: why does Brayan, living in one of the poorest communities in the country, not see himself as poor while many Peruvians who live more comfortably do?

One answer points to our capitalist economic system. For example, the system for measuring poverty in many countries factors in the number of electrical appliances people own among its indicators, unconsciously reinforcing the consumerist model. That way, people always have something new to buy and something old to replace; they are never happy with what they have because their houses are not like the ones in television commercials. This would also partially explain why Brayan does not feel poor: he does not have a TV and is thus not subject to the constant barrage of propaganda. In Brayan’s case, the necessity has not been created.

Nevertheless, not everyone is like Brayan. His example is far from being the predominant model in the rural Peruvian population. The majority of young people in indigenous communities migrate to the city, where they go through a process of acculturation. And although this pattern is positive in terms of urban survival strategies, it brings with it vestiges of colonialism – what is known as a mirror of colonialism, where the subordinate, inferior, and dominated look at themselves through the eyes of the dominator, the one who has the power, resulting in the dominated accepting themselves as inferior. They acquiesce to their poverty, discrimination, and inequality. They see themselves as lesser, unpleasant, unwanted, ugly.

The solution might just come from indigenous cultures. Their value systems differ from those in the West; concepts such as poverty and wealth vary and are more connected with nature and the common good. Would it be possible to search for an alternative development model that preserves these values and promotes a different way of life? Would that be so much to ask?