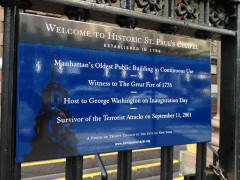 This post was produced for the Global Economic Symposium 2013 to accompany a session on “Can Religion Help Solve Global Problems?” Read more at http://blog.global-economic-symposium.org/.

In lower Manhattan, a small blue plaque hanging on a wrought iron fence describes the building behind the gate.

The building is St. Paul’s Chapel, built in 1766 and a towering example of religion’s societal influence.

In New York and across the United States, Americans just celebrated July 4th, the anniversary of their nation’s independence. From the American Revolution sprouted a legal framework that, among many things,  protected religious liberty in American society. The beginning of the U.S. Bill of Rights states, “Congress shall make no law respecting an establishment of religion, or prohibiting the free exercise thereof.”

Like this lasting legal framework, St. Paul’s Chapel still stands, changed in function but not intent. The red brick church and its time-washed gravestones have survived time, terror, and urban expansion.

Two centuries after its construction, St. Paul’s wore the dust of the fallen World Trade Center towers. The church quickly became a place of gathering for shaken New Yorkers, a diverse group of believers and nonbelievers.

At St. Paul’s Chapel, volunteers grilled food around the clock and used the church as a base camp for rescuers working blocks away at Ground Zero. “Everyone wants to pull together, to work through our grief and nurture our hopes together,” said Rev. Lyndon Harris in September 2001 of the experience. The symbolic chapel had become a gathering place, perhaps its highest possible purpose for the community. Religion in the abstract could similarly serve our globe as a starting point for our bigger tasks.

As New York and the United States have grown up around the brick steeple of St. Paul’s, so too has the function of religious diversity. The world is globalizing, and religious populations are moving, mixing, and growing, yet the shared humanitarian creeds and codes central to most religions serve as common ground. Church and state remain separated, but religion and society have a continually evolving relationship, not just in the United States. President Kirchner of Argentina recently asked the newly installed Pope Frances to mediate a dispute over the Falkland Islands. Religiously affiliated political parties like the Muslim Brotherhood have been wildly influential in places of turmoil like Egypt.

Again, the permanence of St. Paul’s serves as an architectural reminder of our modern social reality: religion remains a factor of daily life. Few forces can have more direct influence on people’s choices and in community norms.

Throughout its storied history, the United States has seen an evolution in this relationship between church and state, this continuing and integral separation and guarantee. This October at the Global Economic Symposium in Kiel, I will be covering the topic of religion in global politics. Living in the United States, I have become engrossed in this laboratory for religious diversity and freedom. However imperfect, there is much to be learned from the ideal of open-mindedness and religious freedom.

No matter how many urban developers might think of a different use for its grassy plot in Manhattan, St. Paul’s Chapel is likely to continue to stand for some time. Similarly, religion will not disappear from people’s minds. Like St. Paul’s on September 11, 2001, religious communities exist amid the current state of global turmoil. It is time to reject divisiveness and focus on serving as a place for community where real unity and discussion take place. Conversation from a place of common, pro-human values can be a starting point for more inclusive economics and policy built on our undeniably shared experience.  The blue plaque at St. Paul’s reminds us that such long-standing institutions can be that meeting place, not just in times of terror. I’ll be exploring how religion can better play a role in advancing the human race together. In New York, Kiel, and beyond, let’s figure this out.