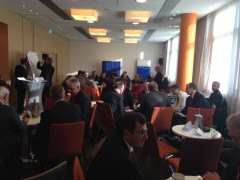 Most of the panels at the Global Economic Symposium had quite a strict format,  with a bunch of luminaries in direct agreement over a topic discussing what the best approach  to the issue would be. Sometimes there would be a challenger and a bit of a debate would arise but in general the atmosphere was one of  problem-solving rather than view-challenging.

But what do you do when an issue is so massive and puzzling that there really isn’t any straight solution? You have an open panel discussion. Which is what the Bertelsmann Foundation did in its final panel at the conference. The topic of several Bertelsmann-organized sessions seemed to revolve around a  common theme this year, that of Sustainable Development and how such sustainability could be implemented. Now, sustainable development is no easy topic to tackle because there are so many different views on what it is, how it can be achieved and who the stakeholders are. So it was no surprise that in the Governance for Sustainable Development session the answers ranged from the theological to the utilitarian. But of all the answers, one alone felt intriguingly simple but effective, almost a no-brainer, really. Women.

We all know that women are biologically more nurture-oriented and this type of appeal to nature is usually what a lot of activists and politicians use in proposing women-centric solutions. But the person doing the talking, Irene Natividad, was not only an activist but also a successful businesswoman. And she made a business-centric point. Women are under-represented in the workforce and while we like to tell ourselves that this is due to their ‘natural nurturing inclinations’ it is often due to a very visible glass ceiling. Meanwhile in this time of economic turmoil, when the ‘growth’ paradigm is starting to be questioned, there is one sure-fire way of obtaining a massive bump in the GDP, and that’s by taking active steps to integrate women in the workforce.

While this would be a great thing for the gentrified but shaky western world, it would be an absolute godsend for the so-called ‘developing world’. Places like the U.S. or Europe would benefit from a 5-7% bump in GDP if all the women currently not in employment started working overnight. Meanwhile developing world countries with a history of gender imbalance in the workforce would benefit significantly more. If all the women in Saudi Arabia started working it would give this already rich country a massive jump of nearly 15% in GDP. If a labour ziggurat like China would benefit from the full labour of its women it could lead to a phenomenal spike in GDP of nearly 20%. Employment is the quintessential form of sustainable growth (if growth can be sustainable). It is the non-destructive exploitation of what is perhaps, our most important ‘reusable’ resource – labour.

The GES is a place for innovative solutions but this solution is pretty straightforward and makes perfect sense. Yet while our central banks are printing money and our politicians are struggling to keep the economic boat afloat in wasteful indirect ways, we are ignoring a massive source of sustainable growth that would also create a more inclusive world for 50% of the population.